Over the course of our Year in Shorts, we’ve covered a great many Disney films. As a matter of fact, we’ve looked at nearly every Oscar-nominated short produced by the studio. Yes, there have been a few blind spots and omissions (notice how we haven’t talked Winnie-the-Pooh yet), but it’s safe to say that ANOTHER Year in Shorts will be decidedly less filled with Disney. At any rate, Rugged Bear is the last Disney short we’ll be talking about this year. And isn’t it lucky that we’re going out with a Donald Duck cartoon?

Jack Hannah's Rugged Bear has a lot in common with one of the first Donald Duck shorts we covered, No Hunting. Both shorts were 50s releases, (Rugged Bear came out in 1953), which means they both utilize that 1950s Disney aesthetic which regular readers will remember I'm a huge fan of. Both films revolve around hunting season, with Donald taking the role of the hunter. And both shorts take a somewhat atypical approach to a Donald Duck cartoon. In the case of Rugged Bear, it does so by not making Donald the main character. Instead the spotlight goes to Humphrey the Bear (who is apparently a recurring Disney character) taking refuge when Man (or in this case, Duck) enters his woods. Unfortunately for Humphrey, he just so happens to take shelter in Donald Duck's hunting lodge, and decides to hide out by pretending to be a bearskin rug. This is obviously not an easy charade to maintain and, as you have no doubt guessed by now, hijinks ensue. However, there is one key difference separating Rugged Bear from No Hunting- it's not nearly as funny. 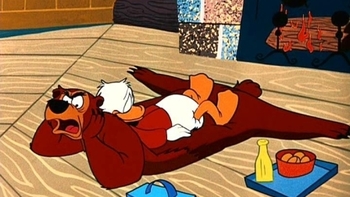 Which isn't to say that it's a bad short, mind you! Rugged Bear has a lot of good stuff going for it- the animation is damn good, if not quite the pinnacle of 50s Disney. There are a lot of fun gags riffing off the premise, even if the short's a little one note. And of course, Donald Duck remains as entertaining a presence as ever, even if he takes a backseat. But that's ultimately the issue with Rugged Bear- the "Even Ifs". Yes, Rugged Bear is a fun short, but there are better Donald Duck shorts out there. Toy Tinkers has a much better foe for Donald (Humphrey is no Chip and Dale), Donald's Crime is better directed and has more artistic ambition, Der Fuerher's Face has better gags, Donald in Mathmagic Land has more creative animation, and Truant Officer Donald has that joke in which Donald thinks he's accidentally murdered his nephews. Stacked up against all that, Rugged Bear doesn't have a whole lot going for it to help it stand out from the pack. At least it doesn't stand out by being offensive, mildly boring or about taxes, I guess.

But what really keeps Rugged Bear from being one of the classics is it doesn't have much in the way of Donald Duck freaking out. Oh sure, he gets annoyed at times, but more at the world than any particular person. Being annoyed at his lot in life is a Daffy trait, for God's sake! Donald Duck is a fountain of bottomless rage, which is always best when directed at another person. Remember when Donald pointed a fucking gun at Chip and Dale? That's the shit I wanna see! All the pain Donald causes Humphrey in this short is entirely incidental! Who wants to see that? Donald spends most of this short trying to nap, and then he does! That's not a Donald short! His nap should be ruined, and he should be furious. Sure, it's good to shake up the formula every now and again (No Hunting is as atypical a Donald Duck short as they come, and that's easily the best of the nine Donald Duck films we've covered), but there comes a point when you have to deliver what we're here for, I think.

But at the end of the day it's hard to complain too much. I mean, it's Donald Freaking Duck! Even at his worst he's still pretty entertaining, and Rugged Bear is far from his worst. (It's certainly better than Toot, Whistle Plunk and Boom, which wound up winning the Oscar that year. Fun fact- that was one of the first Disney shorts we covered! We really are coming full circle!) So if you're trying to introduce someone to the wonder that is Donald Duck, maybe don't start with this one. But if you're treating yourself to a Donald Duck marathon (which sounds like a great plan, if I'm honest), it definitely deserves a spot in the roster. Maybe somewhere in the middle.