When I embarked on our Year in Shorts, I actually mapped out the entire year’s schedule before I wrote a single post. And while I’ve made adjustments here and there, I’ve stayed pretty on target. Originally I was going to write about today’s short the week of Halloween (because what’s scarier than paying taxes?), but I decided to put Dr. Jekyll & Mr. Mouse in its place because I felt like we needed to cover one last Tom and Jerry short for our Year’s final week. So I moved The New Spirit to April 15th due to Tax Day. Then the government gave us an extra month (good thing, because I haven’t filed yet), but I don’t feel like rearranging it again, so let’s just go ahead with the short!

Released in 1942, The New Spirit is yet another piece of World War II propaganda featuring Donald Duck. But unlike Der Fuehrer's Face, this film isn't about how much Hitler sucks. No, this is about a far more exciting topic- the importance of paying your taxes! See, thanks to the Revenue Act of 1942, millions of US citizens were suddenly eligible to pay income tax when they hadn't before (lucky them), and Treasury Secretary Henry Morgenthau Jr. wanted to make sure they were paid promptly and with little grumbling. Clearly the best way to do this was with a propaganda film, and who better to produce it than Walt Disney?

"You think it's a coincidence my company owns Captain America now?"

A lot can be said about Walt Disney, much of it bad, but there's one thing about the man you can't deny- he sure did love America. (In fact, I would argue he probably loved America too much.) So it's really no surprise that he jumped at the chance to throw this short together. But interestingly it seems that Henry Morgenthau Jr. wasn't a huge fan of Disney; or, at the very least, wasn't a huge fan of his biggest star. Apparently after having the initial storyboard presented to him, Morgenthau suggested that Disney create a new character called "Mr. Average Taxpayer" instead of using Donald Duck. Mr. Morgenthau, it seems, did not particularly like Donald Duck.

Morgenthau's just lucky this is pre-McCarthyism, because I think not liking Donald Duck is as un-American as it
gets.

Still, if there's one other thing you have to concede about Walt Disney, it's that he was a canny as hell producer. Disney argued that, as his most popular character, Donald Duck was the perfect choice for this short, and would make tax paying seem more fun. And I would say that his instinct definitely paid off, because, as far as World War II propaganda shorts about the importance of paying your taxes in a timely manner, The New Spirit is pretty darn good! That is, admittedly, setting the bar very low, but there's still some good stuff going on here! 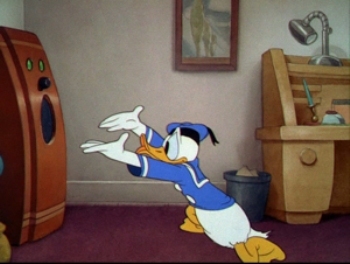 Directed by Wilfred Jackson and Ben Sharpsteen, The New Spirit has a fairly simple premise- Donald wants to contribute to the war effort, and his radio tells him the best way to do it is file taxes. (Ok, simple might be stretching it.) As you might imagine, the short's biggest priority is to be informational, so there's not a whole lot of humor here. Still, the jokes sprinkled throughout are pretty funny (I expect nothing less from Donald Duck), and the animation is up to the usual Disney standard. This becomes especially important in the second half of the short, which drops the Donald Duck pretense altogether and just shows a bunch of wartime imagery. It's very blatant, but at least it's pretty.

As always, the question on how one should review propaganda is a tricky one. Reviewing The New Spirit as a film, I'd say it's decently entertaining. But if I wanted to review it for how effective it is, I'd have to say it was a major success. I don't really know how one gauges these things, but by all accounts the short got the job done- taxes were paid promptly and in full. The short was so successful, in fact, that it spawned a sequel, The Spirit of '43. It's a much weirder short than this one. 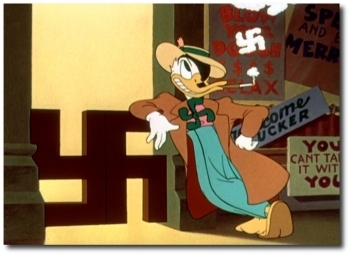 One final piece of trivia to note about The New Spirit is that, unlike every other Donald Duck short, it was NOT nominated for Best Animated Short. No, instead, The New Spirit received a nomination for Best Documentary in its first year at the 15th Academy Awards (not Documentary Short, mind you; that'd come later). I feel like the Academy really stretched the definition of the term "documentary" with this one, but I suppose that in those days "Best Documentary" really meant "Best Propaganda." Each of the twenty-five films nominated in the category's first year was a piece of propaganda. Even The Grain That Built a Hemisphere, another Disney cartoon about the history of corn, is a propaganda short. (And a surprisingly entertaining one, too!)

While I'm never really sure how to discuss propaganda shorts, The New Spirit is certainly more interesting than most. And even though it's pretty dated now (the short has never been aired on television and is unavailable on Disney + thanks in part to its status as an artifact of history), its core message remains pretty strong. Taxes are important, even if the government doesn't always use the money we give them properly. Maybe someone can make a short inspiring them to spend with a new spirit. Wouldn't that be nice?

And hey, at least this short's not horrifically racist!