By 1949, Disney had Chip and Dale more or less figured out. Dale is the one with the red nose. Dale is the dumb one. Chip and Dale should not feed on human flesh. (Not saying they ever did that last one, but by 1949 it was pretty clear that they never would). But most importantly, Disney had found an antagonist worthy of the chipmunks- Donald Duck.

Is Donald Duck the greatest Disney character? Quite possibly. I'd say he's at the very least the funniest, a barely contained bottle of rage just waiting to explode in new and exciting ways. In fact, as far as classic animated characters go, he's right at the top of the list, just below Daffy. Ducks are just funny. Need proof- check out Jack Hannah's Toy Tinkers.

It's a pretty simple short, much in the same vein as a lot of others we've covered on here. Chip and Dale want something of Donald's (in this case, walnuts), Donald doesn't want them to have it, madness ensues. It's not much different from what you'd see in a Tom and Jerry short, with much of the film's uniqueness coming from Donald Duck being such a character. He uses all the tricks in his arsenal to get Chip and Dale to back off, from psychological warfare to just straight up pointing a gun at them. 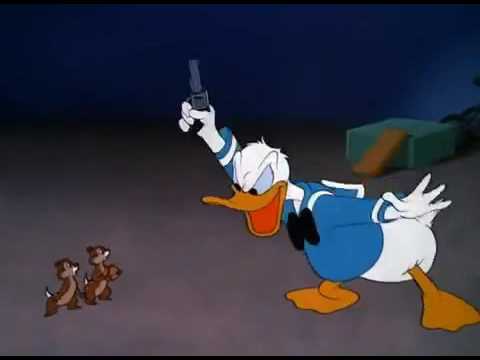 Very silly stuff, but it's all good fun. Toy Tinkers is not a classic short, but it's a very good one. The gags are consistently funny and creative, the animation is nice and, again- Donald Duck threatens the chipmunks with a pistol. If that's not worth an Oscar, I don't know what is. Especially since the Academy Award went to For Scent-imental Reasons that year, a short featuring the anti-Donald Duck- Pepe Le Pew.

Luckily we won't have to deal with that one for a while. So instead, treat yourself to an early Christmas gift with this fun Disney short!