Despite his immense popularity with audiences and nine Oscar nominations to his name, only one Donald Duck film ever won Best Animated Short. To be fair, he had some stiff competition over the years, and it’s interesting to note that 1942 was the only year in that decade in which Tom and Jerry weren’t up for the award. And even more interesting is the fact this is the short which has Donald Duck saying, “Heil Hitler!” a bunch of times. Confused? Don’t be. It’s time to look at another piece of World War II propaganda with Der Fuehrer’s Face! 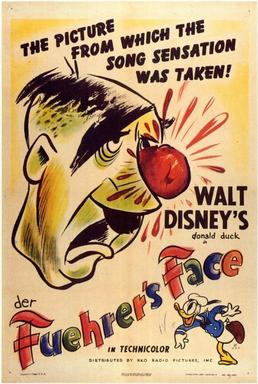 I think it's safe to say that Der Fuehrer's Face is among the most well known propaganda short of all time, and certainly the most infamous. With the United States now at war, filmmakers no longer had to tiptoe around the subject and could say whatever they liked about Nazis. And with Der Fuehrer's Face they certainly had a lot to say, portraying Donald Duck as an impoverished starving citizen of "Nutziland" forced to work long hours at a munitions factory for the sake of the war effort. Thankfully it all turns out to be a horrible dream and he wakes up in America, where economic inequality affects no one and most dehumanizing jobs are done for the sake of corporate interests instead of fascist governments. 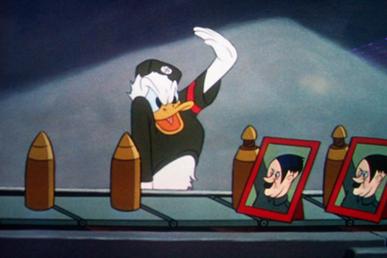 I kid, of course. Mostly. Der Fueher's Face is obviously not a nuanced short, but there's very little room for nuance when discussing why Nazis suck, especially during the war. And while it's obviously a piece of propaganda, it's definitely well made propaganda. The titular song is catchy and funny, the animation is great and allows for some inspired sight gags, and this short might very well contain Clarence Nash's best voice work as Donald.

"Der Fuehrer's Face" would go on to be covered by Spike Jones and His City Slickers, becoming a smash hit in its own right

But, as always, the short definitely has some major issues. It will not surprise you, I'm sure, to learn that the short is horribly racist, with its portrayals of Tojo and Hirohito relying on crude yellowface stereotypes. This was certainly par for the course at the time, but it definitely hasn't aged well. I would argue that the short is mildly homophobic as well, with its caricature of Göring displaying some bizarre camp tendencies. It just seems like an odd choice to me, but perhaps that is just the benefit of hindsight. Obviously these men were all more than deserving of censure, but lazy stereotyping doesn't really add much to the conversation. It's really no different than making jokes about Trump's weight or saying Mike Pence is secretly gay; it might be good for a cheap laugh, but at whose expense?

It is fortunate then, I suppose, that these issues are really only present in the first act of the short, which mostly switches focus to Donald's work at the factory. This segment is easily the best in the film, and features the iconic scene of Donald saluting a row of photographs of Hitler sent his way down the assembly line. The short then transitions to a brief acid trip which was one of Disney's trademarks in the mid-40s before Donald wakes up in the good old United States of America.

Like all of the propaganda shorts we've covered, talking about Der Fuehrer's Face can be a little tricky. But luckily there is a lot more artistry on display here than in a short like All Out for 'V', and it is far more interested in entertainment than a short like Henry Browne, Farmer. It suffers from the same issues that plague a lot of these shorts, but as both a piece of history and entertainment, I think it mostly succeeds. And this is definitely the first short of its kind that I actually looked forward to writing about, which certainly has to count for something.

"Der Fuehrer's Face" is NOT available to stream on Disney +, presumably either because of the racism or Donald Duck screaming "Heil Hitler!" constantly