In our short time at The Great Oscar Baiter, we’ve already managed to cover two pieces of World War II propaganda. But so far we’ve stuck to live action documentary shorts, not yet wading into the pool of animated propaganda. Well, that ends today as we take a look at 1942's All Out for ‘V’. 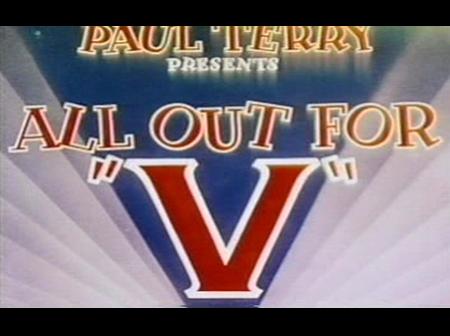 Back in the day, cartoons used to play before all sorts of movies, not just the ones meant for kids. And so during World War II, it made sense that a lot of those animated shorts would focus on the war effort. Some were very good. A lot of them were not so good. And pretty much all of them were at least a little bit racist.

Well... at least it didn't get racist until the end there.

Directed by Mannie Davis and released by Terrytoons (the same studio that brought you Mighty Mouse), All Out for 'V' is a short clearly designed to encourage people to contribute to the war effort at home. Which is all fine and good, but did it have to be some damn annoying about it?

All Out for 'V' is, simply put, not a good short. The animation is fine, sure, but the song is repetitive and obnoxious, and none of the gas are particularly inspired. And while I suppose its message is fine and noble, I feel that the use of funny animals kind of undercuts it in this case. What's supposed to be an inspiring short about people giving all they can for a good cause comes across more like a cautionary tale about the environmental damage caused by warfare. One half expects Treebeard or the Lorax to intervene.

I'm hard pressed to think of a short we covered that WOULDN'T have been improved by some Ents.

Altogether, All Out for 'V' might not be the worst short we've covered so far, but it's still fairly hard to recommend it. Unless you also share my futile goal of seeing every Oscar-nominated film ever made, I'd go ahead and skip this one.