Another day, another Word War II propaganda short. Of all the shorts I’ve covered, these are definitely the hardest to talk about. Oh well, let’s discuss Henry Browne, Farmer anyway. 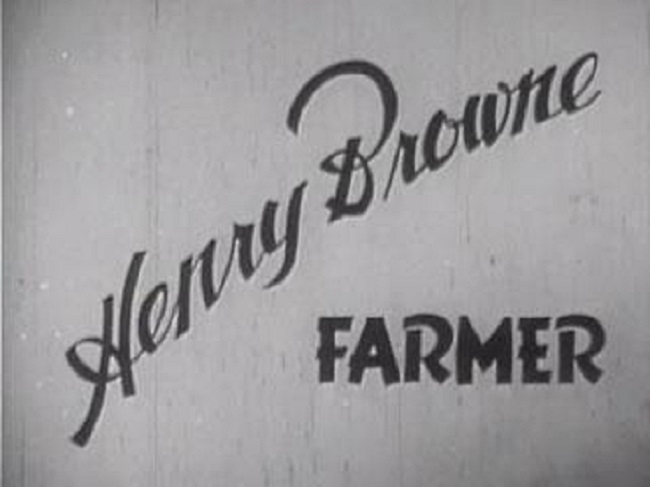 Released in 1942 and directed by Roger Barlow, Henry Browne, Farmer is about... well, a farmer. Named Henry Browne. This is the kind of trenchant insight you come for folks. In all seriousness, Henry Browne, Farmer is similar to our first propaganda short, London Can Take It! in that it focuses on the war at home. Unlike London Can Take It!, there are no scenes of warfare or destruction. Instead, it simply follows a farmer and his family as they grow food for the war effort.

Although the film doesn't make a big deal out of it, I do think it's noteworthy that Henry Browne, Farmer chooses to focus on a Black family. I can't find any sources as to why the Department of Agriculture chose the Browne family specifically, and I don't wish to speculate. I will say though that it is nice to cover a short from this time period with some representation we don't have to feel embarrassed about. (via The Library of Congress)

Is Henry Brown, Farmer a great short? Well, as always, "greatness" is hard to gauge with propaganda films. I find that it's ultimately pretty dry, but I suppose that's the point. And I suppose an argument could be made in its favor by pointing out that it doesn't glorify war or try to make it seem exciting. Instead it celebrates a hard-working man who is doing his part, but shows that doing so isn't glamorous or fun. At the end of the day, I think these types of films are better analyzed by historians or political theorists than film critics (let alone film bloggers). I'm a little out of my depth here to be honest.

But when you seek out to cover every Oscar-nominated film in history, you've got to commit. I wouldn't recommend Henry Browne, Farmer to anyone who isn't already interested in history (be it world history or Oscar history), but I wouldn't recommend not watching it either. Yet another brilliant piece of insight from The Great Oscar Baiter!