Sometimes it feels like film noir is a genre I like more in theory than in practice. It certainly seems like something I really like, and there are quite a few films within the genre that I absolutely love, but very often when I’m actually watching a proper film noir I’m left unsatisfied. Perhaps I like the idea of it, or the strange variations on it that people make. One such variation is the 1945 Disney short, Donald’s Crime. 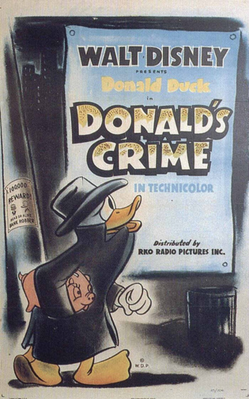 Directed by Jack King, Donald's Crime is a story of greed, guilt and the extreme lengths to which a man will go in order to get laid. It follows Donald as he prepares for a date night with Daisy, only to discover that he has no money. Seeking to avoid embarrassment (and, again, just desperate to get some tail), Donald decides to steal from Huey, Dewey and Louie's piggie bank. (Has Disney ever explained what happened to their parents? I assume they were killed by the hunter who shot Bambi's mother.) Aided by a voice in his head allegedly voiced by Winnie-the-Pooh himself, Sterling Holloway, Donald robs his nephews and has a fun night out on the town with Daisy. But soon, that same voice in his head turns against him and Donald's conscience starts to gnaw at him. Why his conscience didn't turn against him earlier for leaving his three nephews home alone without a babysitter just so he could get laid. The 40s were a different time, I guess.

(via We Heart It)

One of the wonderful things about Donald Duck is that he's such a versatile character that you can slot him into just about any situation and have a good time. How many other Disney characters could you put in Nazi Germany? Can you imagine a good short about Mickey paying his taxes? Or Goofy on a hunting trip? Goofy doesn't hunt, he's too good-natured! And it's the same case here. Admittedly, the premise is pretty solid on its own, so throwing Donald Duck into the mix makes it even better! Honestly the only Donald Duck short we've watched that wasn't that good was Tea for Two Hundred, and everyone's allowed the occasional miss right? His batting average is still exemplary. 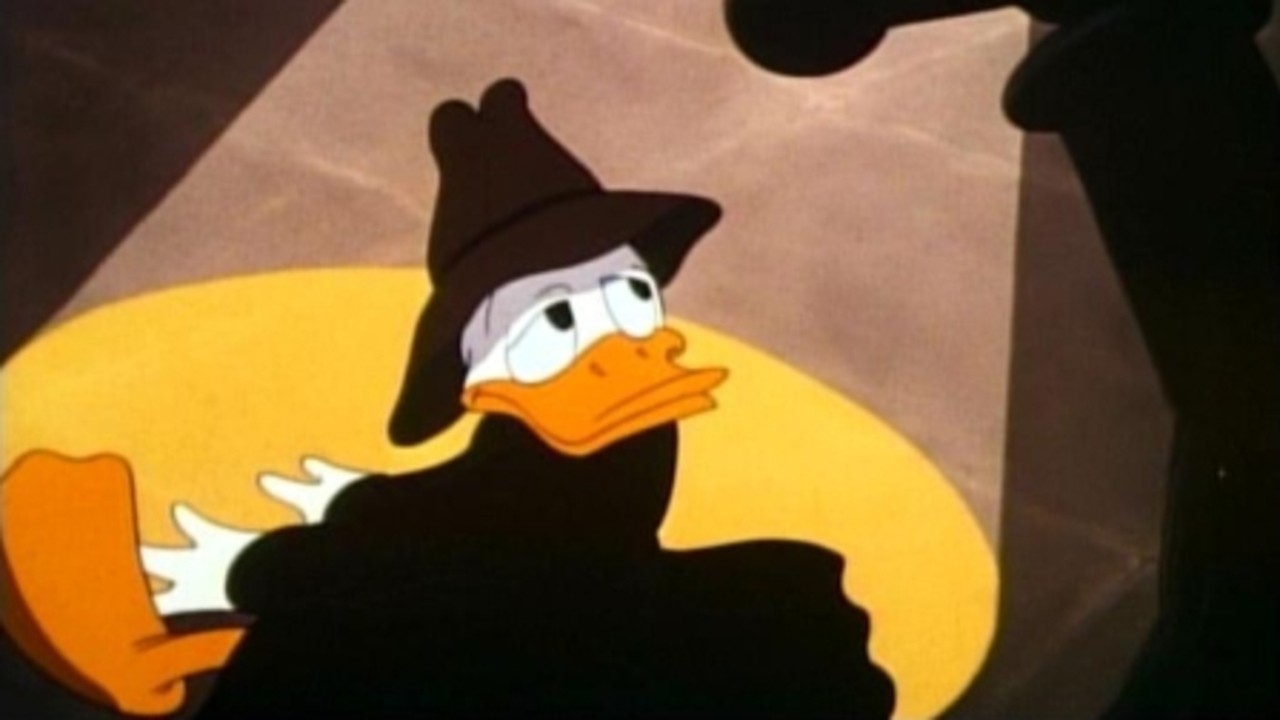 But Donald's Crime is more than an average Donald Duck short. The writers and animators were really firing on all cylinders with this one. The central gimmick of Donald battling with his conscience is a great one, and it leads to a lot of excellent visuals. While I've expressed my love for the 50s Disney aesthetic before, the 40s were pretty wonderful as well, and this might be their best looking short from that time period we've covered. Parodying noir films really gave the animators a chance to flex their creative muscles, especially in Donald's nightmare scenario. The dark lighting and crazy angles result in a short that's truly something to behold. And in addition to all that, the short is packed to the brim with a lot of creative visuals, with a lot of great visual gags throughout. I especially like the constant gag of Donald's appearance changing depending on how he's feeling. That's shit you can't pull off in live action. The filmmakers took full advantage of their medium here and it's wonderful.

Regular readers of this blog know I'm a huge fan of Donald Duck, and hopefully shorts like this can perfectly demonstrate why. How much do I love Donald's Crime? Well let me put it this way- this short lost the Oscar to Quiet Please! And I think Donald's Crime DEFINITELY should have won instead! I'm siding with Donald Duck over Tom and Jerry! That's huge!

"Donald's Crime" is not on Disney + for some inexplicable reason. Get it together Bob Iger.