There are some things in cinema that we know to be true- Movies set on trains are automatically better than movies not set on trains. Nothing is better than watching a movie and having Margo Martindale pop up unexpectedly. And Tom and Jerry never ever talk. But there are exceptions to every rule. The Polar Express is set on a train and that movie’s not very good at all. The only thing better than watching a movie with a surprise Margo Martindale is watching a movie and seeing her name in the opening credits. And on a few occasions, Tom and Jerry have spoken. Some of them are clearly regrettable; Tom and Jerry The Movie comes to mind. But sometimes it works, and the 1945 short Quiet Please! is one of those times. 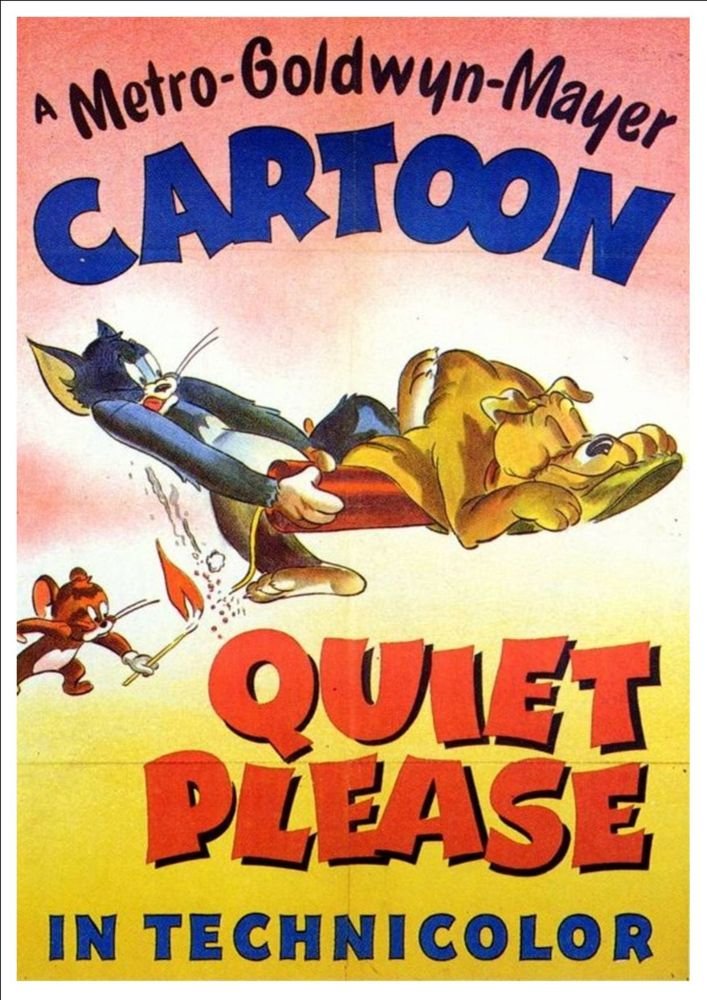 Of all the Tom and Jerry shorts we've covered, Quiet Please! is the one I've had the most difficult time finding information about. It doesn't even have a Wikipedia page for Pete's sake! Still, some things need no explanation- We know it's a Hanna-Barbera film, we know it's produced by Fred Quimby for MGM, and it shouldn't come as too big a surprise that it won an Oscar. What you might not know is the plot, and that's pretty easily summed up- the constant battles between Tom and Jerry is keeping the house's guard dog, Spike, awake. Spike is a reasonable dog but he needs his sleep, and he lays down an ultimatum- keep the noise down, or he'll have to tear Tom limb from limb. Jerry, being a sadistic little bastard, naturally takes advantage of this opportunity. 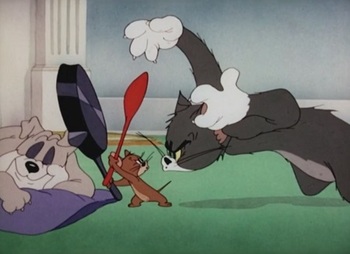 Despite all the Tom and Jerry we've covered in our Year in Shorts (heck, we talked about one exactly a week ago), we've yet to discuss Spike. And there's a very good reason for that- of the thirteen Tom and Jerry shorts to be nominated for an Oscar, Quiet Please! is the only one to feature Spike. Which is a shame really; I'm not sure what the consensus is on Spike amongst Tom and Jerry fans, but I remember liking his shorts as a kid. The Truce Hurts and Pet Peeve were particular favorites of mine growing up, and I feel like Spike brought with him a different energy that allowed for some variety to the series. Admittedly, films with Spike are all pretty formulaic (Spike threatens Tom, Jerry tries to get Tom in trouble), but that's just par for the course with old cartoons. 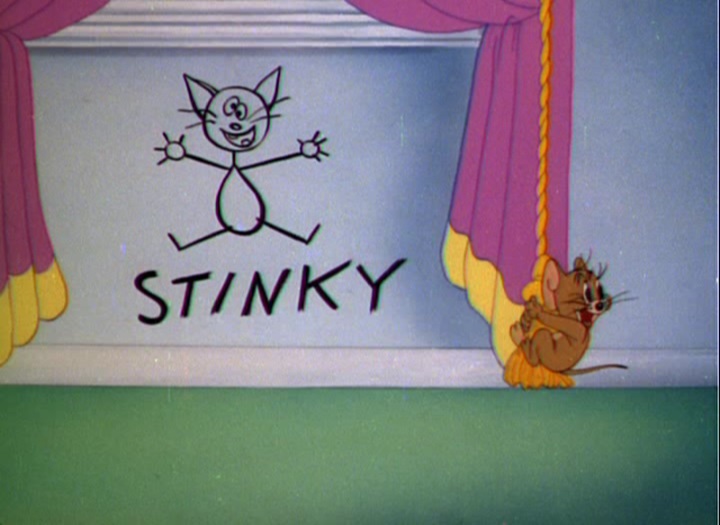 It also has to be said that Jerry comes across as extra evil in the shorts like Quiet Please! In fact, I'm sure it's the cartoons with Spike which solidified my impression of Jerry as a sociopathic monster as opposed to just a resourceful mouse fighting for his life. Many of Tom's misfortunes in other shorts are the result of his own actions, perhaps assisted a little by Jerry. In contrast, Jerry goes out of his way in the Spike shorts to cause trouble for Tom (and, on occasion, Spike). On multiple occasions he's actually rewarded for his behavior! Some people find this aspect of Jerry's personality grating, but I think part of that comes from a misconception that the audience is meant to be rooting for Jerry in these scenarios; I certainly never did. Of course, that might be a sign that something's wrong with me. It would explain why I love such violent cartoons. But I digress. (I know, imagine that, me going off on tangents while discussing Tom and Jerry.) Let's stop pontificating on Tom and Jerry in general and focus on Quiet Please! in particular. And honestly, it's a damn good short! In some ways, Quiet Please! plays a bit like a Greatest Hits album for Tom and Jerry- between Jerry making noise to get Tom in trouble, the absurd cartoonish violence and even the scene of Tom getting on the wrong end of some electricity, this is all stuff we've seen before. But as always, it's not about originality, it's about execution.

And the execution is pretty much on point. The short starts off on the right foot by opening in medias res, with Tom and Jerry's latest battle well underway. But instead of following their cat and mouse game, this part of the short is told from Spike's perspective, a clever bit which allows the viewer to get an objective view on how truly ridiculous Tom and Jerry's shenanigans really are. In most of their shorts, we barely think twice when Tom picks up a gun to shoot Jerry; typically the violence has built to that point. But when a short opens with gunfire, it's so jarring and silly that one can't help but laugh at the absurdity. Obviously the absurdity doesn't stop there! Something I've found interesting about watching all these Tom and Jerry shorts has been really exploring their range. All Tom and Jerry shorts are cartoonishly violent, but it's interesting seeing the degrees of exactly how cartoonish they'll get. None of them are "grounded", of course, but some are less silly than others. But the sillier the better I say, and Quiet Please! definitely falls on the silly end of the spectrum. Real world logic need not apply here, and thank heavens for that. 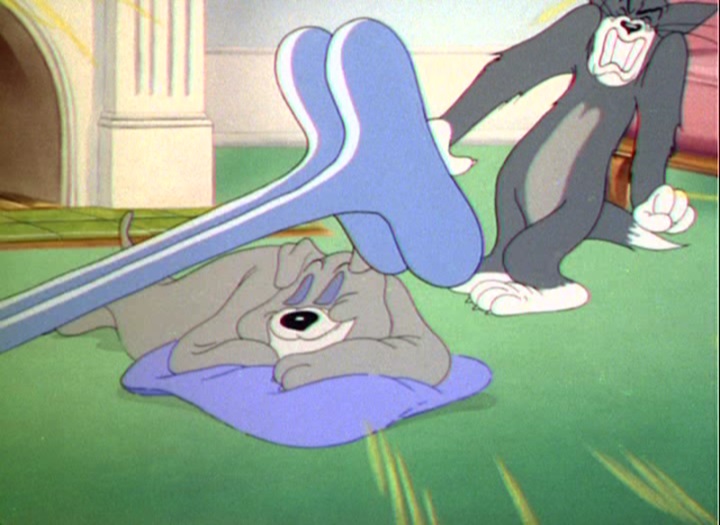 Nor, it seems, does Tom and Jerry logic need apply. Tom (and to a lesser extent, Jerry) speaks in this one, which certainly sets it apart as an oddity. I'm of two minds on this. On the one hand, Tom and Jerry speaking always feels off, and there's very little that Tom achieves by speaking that couldn't be done by staying silent. It's really only necessary in the case of the custard pie gag, which is one of the short's weaker moments. But Tom's speaking isn't terrible, and one really shouldn't get too hung up on canon, especially when it comes to Tom and Jerry. (Which is not to be confused with getting to hung up on cannons in Tom and Jerry; we covered that last week). 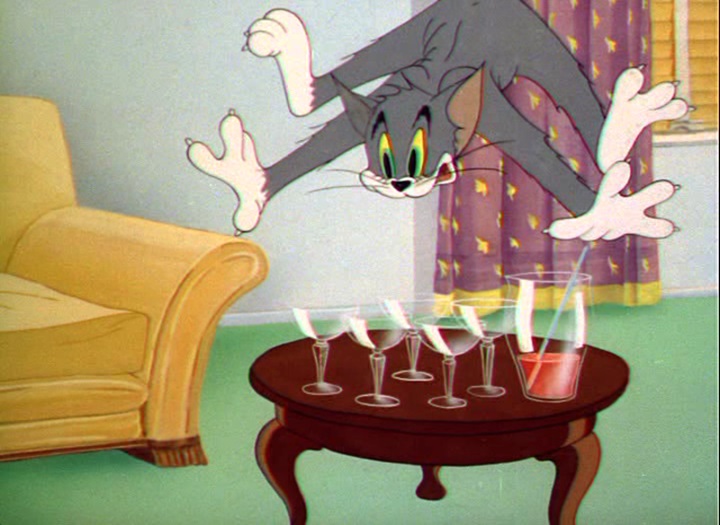 Quiet Please! is not a top tier Tom and Jerry short, but that has more to do with my exactingly high standards with the series than it does its quality as a cartoon. The animation in this film is probably the weakest we've seen since the very early days (it's not bad, it's just not solid), and while the gags are consistently funny, none of them are particularly inspired. And while you should all know by now I love me some Tom and Jerry, I do admit that I probably would have given the Oscar that year to Donald's Crime instead, a pretty hilarious noir sendup featuring Donald Duck. But these are all minor gripes, and nothing can distract from the fact that Quiet Please! remains a damn good time with everyone's favorite cat and mouse!

"Quiet Please!" is not available to watch on HBO Max, and I could not possibly tell you why. It's not even racist!