A Year in Shorts Day 9: "Toot, Whistle, Plunk and Boom"

Ah, the educational cartoon. What would the substitute teachers of the world do without them? With their bright colors, amusing jokes and ostensibly instructional purpose, these shorts have certainly brightened up many an otherwise boring school day. And I’m willing to bet that at least some of you watched today’s short in class,  Toot, Whistle, Plunk and Boom. 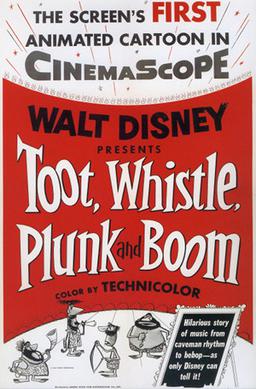 Toot, Whistle, Plunk and Boom was released in 1953, and was the first Disney film to be distributed by Buena Vista as opposed to RKO. Not content to be the only "first" for the studio, the short was also the first Disney cartoon filmed in CinemaScope, which Disney would use memorably a month later with the release of 20,000 Leagues Under the Sea.

I think overall the shift in style is successful. The use of color is nice and the art style is pleasant to look at, even if it doesn't quite reach the same level of artistry that Gerald McBoing-Boing did. I'm also fond of a lot of the backgrounds, which bring to mind some of the more atmospheric scenes in Alice in Wonderland, which is easily one of Disney's best films on an artistic level.

Unfortunately, the UPA art style is one that lends itself to exaggeration and caricatures, and while that's normally not a bad thing, it can get tricky when you're trying to portray different cultures and races. That, combined with the general sensibilities of animation studios at the time, results in sections of Toot, Whistle, Plunk and Boom coming across as shockingly racist.

There's certainly a reason you can't find this short on Disney Plus.

Even beyond the use of crude stereotyping, I don't know how effective Toot, Whistle, Plunk and Boom is as an educational tool. At only ten minutes long it obviously can't give a detailed overview of the history of music, but it does seem a little unbalanced. The history of the horn section (or the "Toot", if you will) is relatively in depth, but the other three feel like an afterthought.

Of course, with cartoons such as this, the top priority is in being entertaining, not educational. But even then I feel that Toot, Whistle, Plunk and Boom can't help but fall a bit short. The music throughout is nice, but nothing great. The gags sprinkled in with the education are amusing, but never particularly funny.

All in all it's a fine short with some good animation, but I wouldn't have given it the Oscar. Consider this- 1953, the year this short was released, also saw the debut of Chuck Jones' masterpiece, Duck Amuck. Toot, Whistle, Plunk and Boom won the Oscar that year.

I wonder what Daffy Duck would say to the Academy about that?

Yeah, that about sums it up.