A Year in Shorts Day 143: "How to Avoid Friendship"

Writing an Oscar blog comes with a lot of perks, but also a great number of challenges. And chief among them is this- it simply makes you too popular. I can not tell you how many times people have, upon hearing that I spend my precious free time writing ten paragraph essays critically analyzing Tom and Jerry shorts, have instantly wanted to be my best friend. As a reader of this blog, you’ve undoubtedly experienced similar issues. It is the curse of the Oscar Baiter. Luckily, animator Gene Deitch has created a film just for people like us, aptly titled How to Avoid Friendship. 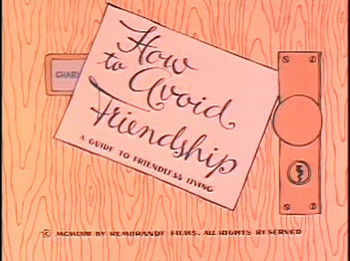 If the name Gene Deitch sounds familiar, it's because we've mentioned him a few times on the blog before. After Hanna and Barbera stopped making Tom and Jerry shorts, the series was handed off to Rembrandt Studios in Czechoslovakia, all directed by Gene Deitch. The thirteen shorts made by Deitch and his team are widely considered, by fans and Deitch himself, to be the worst of the Tom and Jerry films (at least until the direct-to-video era), and it's not hard to see why. Still, Gene Deitch had a pretty long and interesting career outside of Tom and Jerry, and managed to produce some good to great shorts. How to Avoid Friendship is not his best film, but it's got a unique style and it's pretty damn funny to boot! Let's check it out.

Right off the bat this 1964 short earns points from me by taking the form of a fake instructional video, which is a proven formula for short films. Between the Pete Smith Specialties to the Goofy "How to..." cartoons, there's no better way than to guarantee your short is at least mildly amusing than to make it a fake instructional video. And thanks to the combination of Eli Bauer's clever script and the expertly sardonic narration by Arthur Treacher, How to Avoid Friendship is a great dole more than mildly amusing! Gene Deitch and his team have made a funny and very educational guide on how to scare off any potential chums.

The animation is nice too! This style of limited animation is hard to pull off, but when it works it works. And it works here! Deitch's style isn't for everyone, but the simplistic line work and bold use of colors makes for a short that's always engaging to watch. The characters are all expressive and suitably ghastly, and the different shadings help sell the necessary emotional beats. How to Avoid Friendship is arguably an "ugly" short, but that's sort of the point. There's a fine line animators have to walk with grotesque designs, but Rembrandt really nailed it on this one.

Overall, How to Avoid Friendship is a funny film and a delightful look into the whimsical world of 60s animation. It didn't win the Oscar, losing out to The Pink Phink, which made similarly great use of that 60s style. Rembrandt had a distinct aesthetic and a sneakily subversive edge, and while How to Avoid Friendship isn't the best example of that, it's far from the worst.