Regular readers of The Great Oscar Baiter (or fans of animation in general) are no doubt familiar with the name Friz Freleng. Just yesterday we talked about one of the many shorts he made for Warner Brothers. But although his work with the Looney Tunes remains his greatest legacy, he played an instrumental role in the creation of another iconic cartoon character: The Pink Panther, the star of today’s Oscar-winning short, The Pink Phink. 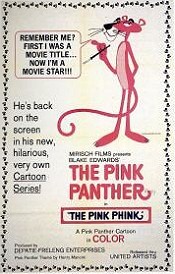 Released in 1964 and directed by Friz Freleng and Hawley Pratt,The Pink Phink was the first animated short to feature the Pink Panther. The panther had made his debut a year prior in the iconic opening credits for The Pink Panther, also directed by Freleng (the credits that is, not the rest of the movie). The cartoon was such a hit with audiences (for my money, it was easily the funniest part of that movie) that United Artists enlisted Freleng's studio to animate more shorts featuring the character.

When it comes to animated shorts, The Pink Phink does not exactly break the mold, story wise. But with these kinds of shorts, story is secondary, really just a framework from which to hang a series of sight gags. And while The Pink Phink is never laugh-out-loud hilarious, its gags are consistently clever and amusing, and that's really all you can ask for.

And beyond its comedy value, you have to give The Pink Phink points for style. The animation looks pretty simple, but it's honestly fairly complex stuff when you look at it. The limited line work not only gives the short a unique look, but also sets up some pretty funny bits that you just couldn't pull off with more complex animation. That, combined with the striking use of color and Henry Mancini's inspired score, helps set The Pink Phink apart from the average gag-driven short.

The Pink Phink's Oscar win marks the first (and so far only) time in history an animation studio won an Academy Award for the debut short. And while it admittedly wasn't going up against particularly stiff competition that year, it's still pretty darn cool.

But I guess being pretty darn cool is what the Pink Panther's all about. The panther. Not the diamond. Or the movie series, which is about how silly French people are.