Way back in November, we covered Nick Park’s A Grand Day Out, the film debut of British comedy icons Wallace and Gromit. While that was a very good film, it wasn’t one of my favorites. Still, the short showed great promise (both from its director and its characters), and that promise was eventually fulfilled four years later with the 1993 film The Wrong Trousers. 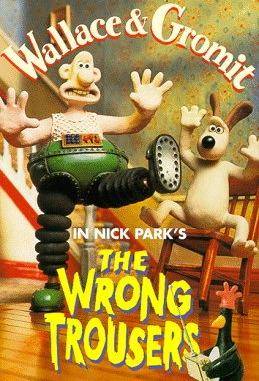 The premise for The Wrong Trousers is... well, not simple, per se, but it's easy enough to explain. It's Gromit's birthday and, as a gift, Wallace has invented him a mechanical pair of trousers which will walk Gromit on their own. But Wallace also discovers he's running low on money so he'll need to take in a new boarder. Said boarder arrives in the form of a penguin, who is secretly a master criminal who disguises himself as a chicken named Feathers McGraw, who plans to use the Techno-Trousers to aid him in a diamond heist. See? All perfectly simple.

Right off the bat, it must be said that this film is undeniably an improvement in its predecessor in every way- the animation is better, the story is more engaging, and the whole thing is just a lot of fun to watch. Wallace has really come into his own as an inventor, and the film gets a lot of comic mileage out of his various time-saving contraptions. The pacing has improved significantly as well, although it's not so fast that it loses its Wallace and Gromit charm. There's a very specific rhythm to these cartoons, and this film shows that Nick Park definitely found the right groove. 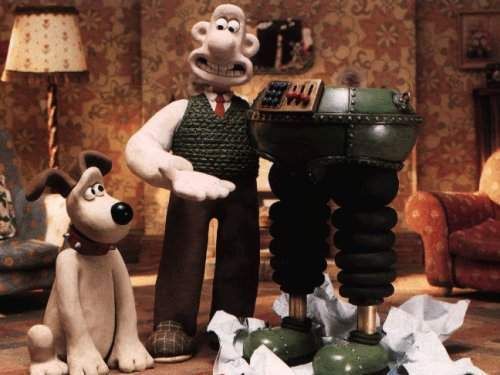 But what really sets this short apart are a couple of crackerjack set pieces towards the end. First you have Feathers piloting Wallace in the Techno-Trousers to steal the diamond, which is pretty damn entertaining on its own. But really what sells that sequence is Feathers' quiet desperation as things start to go wrong, his beady eyes blinking maniacally as he begins to sweat. It's just funny stuff, you can't deny that.

That's immediately followed by the short's best scene (and probably the best scene in the series), with Gromit trying to catch Feathers, with Wallace trying his best to help. What follows is a fast-paced, technically impressive model train chase throughout the house, culminating in Gromit having to build the track in front of him just so he can keep up. Also the moment where Feathers pulls a gun on Gromit is just a masterful bit of comic timing, although perhaps I'm biased. As you know, I'm a huge fan of birds pulling pistols on cute mammals.

Apparently Nick Park considers The Wrong Trousers the best Wallace and Gromit short, and I can't argue with him on that. This short won Wallace and Gromit their first Oscar, and a very well-deserved one at that. So if you're a fan of stop motion, quirky British humor or just fun animated films in general, this one is definitely worth your time.

And really, do cartoon villains get much better than Feathers McGraw? There's something so sinister and yet undeniably adorable about that penguin. Honestly, what else do you need?