Well, we made it. The 365th day in a Year in Shorts. And it seems oddly fitting that our last shot will also be our (actual) last UPA short. Before I started this blog, UPA was not really an animation studio that I spent much time considering. Oh sure, I was aware of them. But I never really paid them that much attention, or considered the impact they had on the world of animation as a whole. That started to change the first time we covered them, just four days shy of an entire year ago, to the point where I now consider myself a pretty big fan! And so let us bring things full circle, and close out a Year in Shorts with their 1953 short, The Tell-Tale Heart. 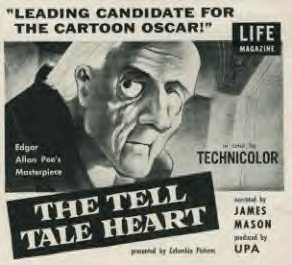 Released in 1953 and directed by Ted Parmelee, The Tell-Tale Heart is (obviously) adapted from the short story of the same name by Edgar Allan Poe, although the more cultured among you might better recognize it from the "Squeaky Boots" episode of SpongeBob. Strangely enough, 1953 saw the release of another short adaptation of the same story, this time a live action film made in Britain. That one didn't receive any Oscar nominations, though. At any rate, the story follows thusly- it follows an unnamed narrator (voiced deliciously by a hammy James Mason) who desperately tries to convince the audience that he's not mad while also recounting a story of how he murdered an old man because of his eye. Let he who hasn't cast the first stone. Desperate not to get caught, the narrator hides the body under the floorboards, but as the police arrive the guilt (or something else) soon drives him mad.

Watching the film, you can hardly blame me for forgetting this was a UPA short, can you? In many ways, it's nothing like any of the other UPA shorts we've covered. Whereas most of their work is silly and tongue-in-cheek, The Tell-Tale Heart is completely serious, without a single laugh to be found. (Ok, Trees and Jamaica Daddy didn't have any laughs either, but that wasn't intentional.) This is an incredibly dark cartoon, especially for the 50s, when adult animation didn't really have the (relatively) wider audience it has today. It's a little ridiculous that this film got hit with an "X" rating in Britain, but I can certainly understand the thought process. I'm honestly amazed that Columbia let UPA release this, and I can only assume that they must have had a truly absurd amount of creative freedom. (As a point of interest, 1953 saw the release of ANOTHER Oscar-nominated UPA short which was a bit more conventional.) There's probably some terrible alternate universe out there where the suits balked at this short and forced UPA to turn it into something starring Mr. Magoo or something. And I mean, look, Mr. Magoo's The Tell-Tale Heart would be fucking hilarious, but I'm glad we got the straightforward adaptation instead. Keeping the first person narration really allows the story to come to life, to the point where virtually the entire film itself is drawn from first person; we're seeing the story through the narrator's eyes, which somehow manages to make everything that much creepier. There are even some fun impressionistic effects sprinkled throughout, as the film shows us what the narrator thinks he's seeing. It's a neat trick and it really just doubles down on the spookiness. 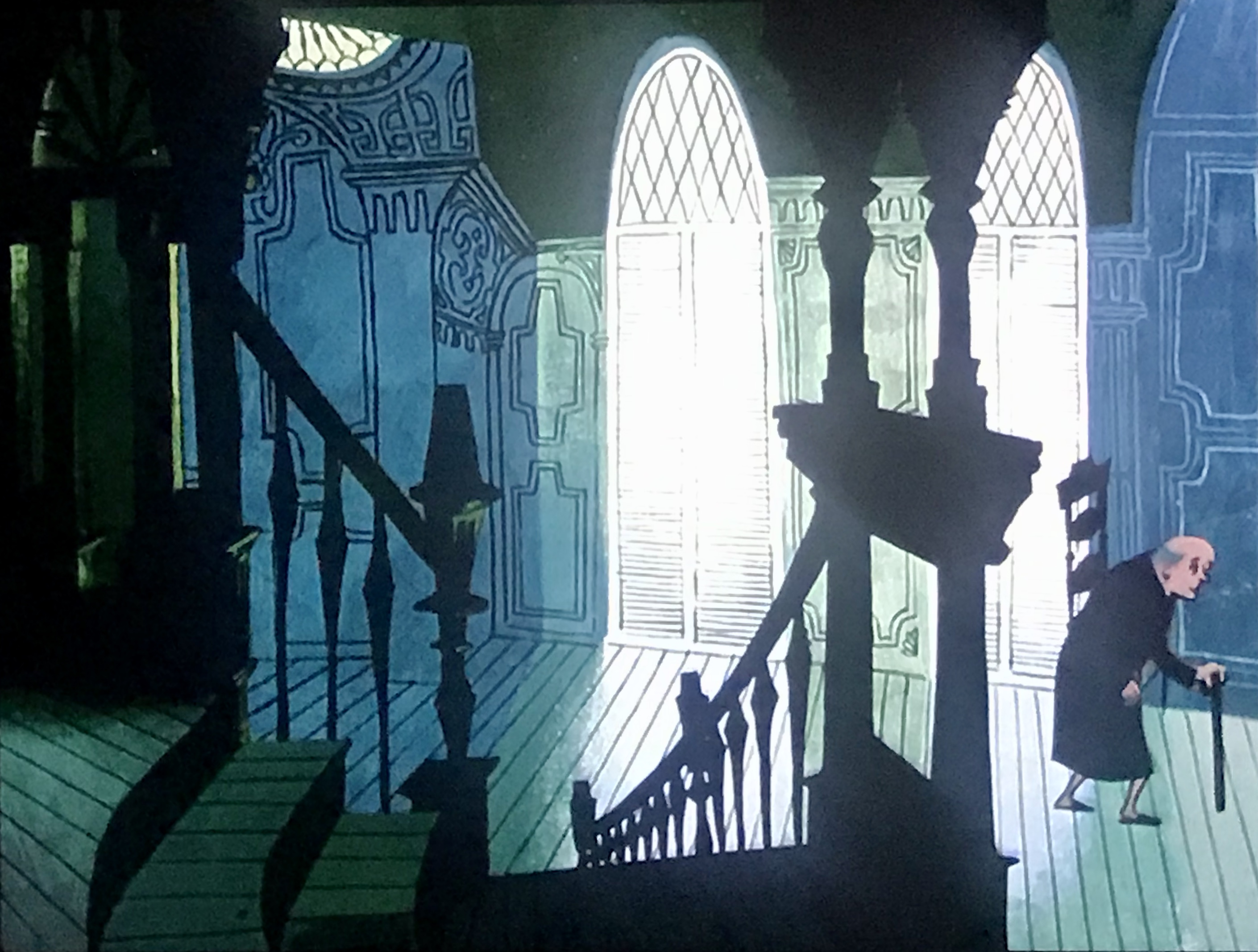 At the same time, the UPA DNA is still there, even if it looks a little different. Their trademark limited animation is on full display here, and might actually be the most extreme version of it we've seen. Movement in this short is very sparse, with characters often gliding across the screen or being drawn as vague silhouettes. In lesser hands, this could come across as cheap or lazy. But here it works perfectly with the film's spooky atmosphere, adding to the film rather than taking away from it. It certainly helps that James Mason's narration provides the energy that the animation might lack, proving that sometimes it pays to have a celebrity voice actor! But more importantly, any time saved in limiting the animation so severely was not wasted, allowing the artists (led by designer Paul Julian and head animator Pat Matthews) to pour an incredible amount of their creative energy into individual drawings. The old man's face is suitably terrifying, and the looming shadows throughout the short fill the frame with foreboding and menace. And the backgrounds! My God, the backgrounds! Has any UPA short had such beautiful backgrounds? The angles, the lighting, the way it manages to be colorful and dark at the same time... It's simply magical stuff. The phrase "every frame a painting" has rarely been as true as it is here. 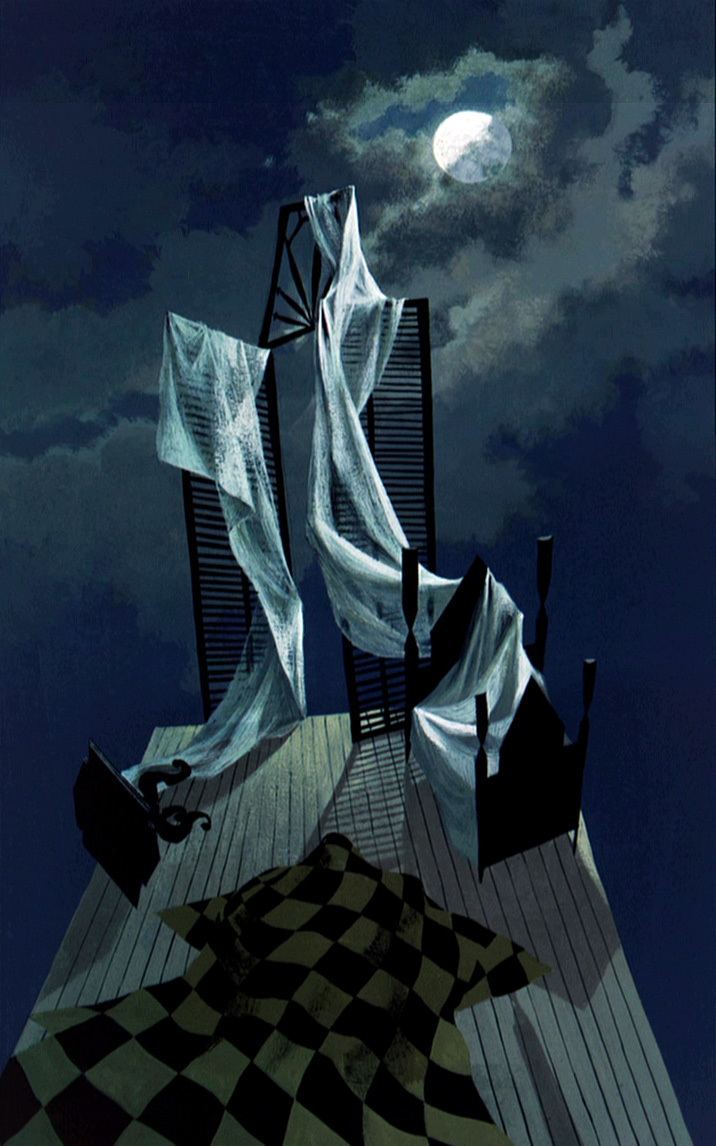 Sadly, despite all it had going for it, The Tell-Tale Heart couldn't win the Oscar. (Perhaps if it had been a 3-D release as originally intended the Academy might have been more impressed!) In what feels like a slap in the face, the award went instead to Toot, Whistle, Plunk and Boom, which was ALSO one of the first shorts we covered! That seems horribly unfair to me if I'm honest. Disney jacks UPA's style and they get an Oscar, while UPA is taking their aesthetic to new levels and they get diddly squat? Doesn't sit right if you ask me, but I guess that's the price you pay for being a revolutionary. At any rate, time has been kinder to The Tell-Tale Heart. That 50 Greatest Cartoons list (the one with Gerald McBoing-Boing at number 9) has The Tell-Tale Heart ranked at a respectable 24th place, and even got included as a DVD extra on Hellboy! And perhaps most important of all, it has earned the spot as my personal favorite UPA cartoon, and one of the best shorts we've covered over all. When I first planned out the schedule for A Year in Shorts over a year ago, I simply had The Tell-Tale Heart scheduled for today because... well, it's Halloween, you know? But now as I look back, I really can't think of a better way for us to close out the year. 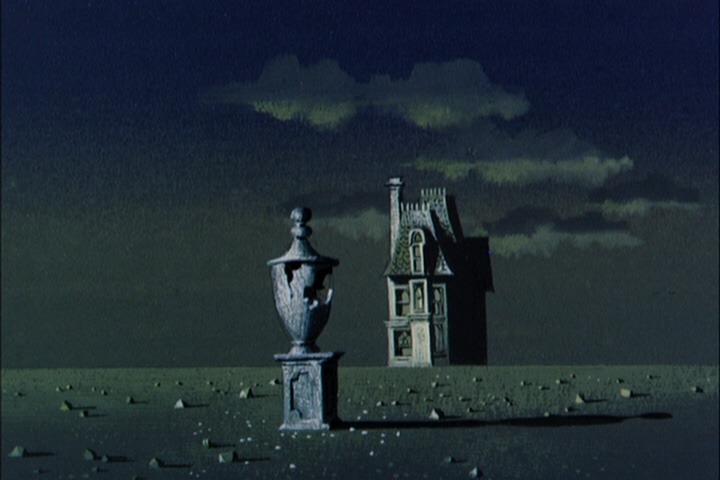 And what a year it's been! 365 short films, ranging from depressing documentaries to absurd comedies, masterpieces to total pieces of shit (with everything in between), shorts from over twenty countries and nine decades of filmmaking... It's been an adventure, to say the least, and one I'm grateful to have shared with you. As for what's next for The Great Oscar Baiter... Well, I don't plan on continuing to make daily posts any time in the foreseeable future, I can tell you that much. But the Oscar Baiting will continue, with returning features like Song of the Week and maybe some new ones as well. Heck, I might even review some new movies in anticipation for Oscar season! It's a wild, wonderful world of movies out there my friends, and we've barely even scratched the surface!

You can find the entire ranked list of shorts here on Letterboxd!