UPA’s groundbreaking style of limited animation, pioneered in films like Gerald McBoing-Boing, spawned a lot of imitators. A lot of imitators. Some were very good. Some were pretty terrible. But few could hope to beat the masters at the top of their own game. For proof of that, look no further than UPA’s excellent 1953 offering, Christopher Crumpet. 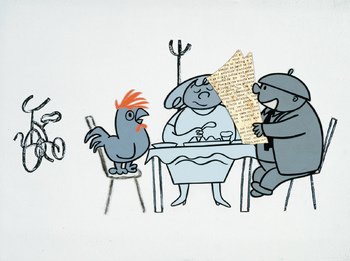 Directed by Robert Cannon, Christopher Crumpet is an exceedingly silly story. In an attempt to calm down his dog, an unnamed cartoonist tells the story of Christopher Crumpet, a "problem child" who turns into a chicken every time he doesn't get his way. This is a real problem for Mr. Crumpet, as "no man should have a chicken for a son." And you really can't argue with that. But in order to get some peace and quiet, Mr. Crumpet tries to buy his son a rocket. Like I said, it's exceedingly silly. But it's the right kind of silly, you know? It's not exactly setting the world on fire, but it's got a good-natured sense of humor that's consistently clever and underplayed in the face of its absurdities, and what more can you ask for really? And it certainly helps that the voice actors sell the hell out of everything.

But as with all the UPA shorts, what really sets Christopher Crumpet apart is the animation. That's especially true here, with the central conceit of us watching a story being animated really freeing up the animators at UPA to get creative. (As a fun aside, one of the said animators is Bill Melendez, best known for bringing Charlie Brown and company to life for all the Peanuts specials and movies. It makes sense that Melendez worked for UPA; those Peanuts specials utilize the principles of limited animation to bring comic strip characters to life after all.) Watching a character literally get drawn into the scene as he speaks or the way in which a character will open a door to have the room materialize on the other side is just pretty damn cool. And there's all sorts of fun tricks the animators do to simulate movement or the passage of time, most notably the night scenes animated with white lines on black paper. Unbound by any need for "continuity" or complicated backgrounds, the short really benefits from the high level of visual freedom the animators were given. It's a real treat for the eyes, although honestly what else can you expect from UPA at this point? A lot of it is obviously done with the intent of saving money (as is pretty much the case with all limited animation), but if you can cut corners and look good while doing it? Well, then you're really on to something there.

And I think UPA's competitors knew that too. Hell, that was the same year in which Disney won the Oscar for Toot, Whistle, Plunk and Boom, which clearly bears more than a passing resemblance to a UPA short. And that year's ACTUAL Best Animated Short, The Tell-Tale Heart, certainly made great use of limited animation (albeit in a much different style). That's one of the great things about animation when you get right down to it. At the end of the day, the only real limit to what you can do is your skill and creativity. Certainly having time and money helps, no doubt about it. But with a little bit of flair, a lack thereof can't hold you back as much as you'd think!