Oh, Pete Smith. What would we do with you? Well, we’d probably have watched a lot less awkwardly racist or sexist shorts, so that would have been nice. But on the flip side, do I want to live in a world without Movie Pests? I should think not. The last Pete Smith Specialty we covered was Audioscopiks, a film made to show off 3-D technology which, rather understandably, does not hold up particularly well today. Well today’s short, the 1940 film Quicker’n a Wink, was also made to showcase new film technology, although thankfully it’s managed to remain a bit more impressive in the eighty years since its release! 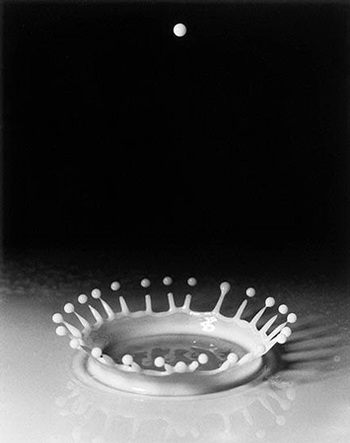 Directed by George Sidney, Quicker'n a Wink sees Smith (and by extension, us as the audience) journey to MIT to the lab of Harold Edgerton to show off his stroboscopic photography. What does he do with said photography? Well, he takes images of everyday objects and activities (such as a drop of milk hitting a puddle or a football being kicked) as well as not so everyday activities (do you regularly drop an egg on a fan?) and presents them in slow motion, allowing us to see in detail what happens. In short, it's the sort of thing that the stuff of cool YouTube videos are made of! So, yes, some of the novelty has worn off regarding this short. But honestly, this sort of thing is always cool, so it's hard to hold that against the short. Besides, do any YouTube compilations have Pete Smith's snarky narration? I highly doubt it, so that's a point in Quicker'n a Wink's favor! Another point? No racism! And hell, it's only slightly sexist, and in a way that's more innocently cheeky than demeaning. I know that's not a lot to say in a short's favor, but you know... it's not nothing either. Once again we find ourselves with a short that's better left speaking for itself (perhaps I should create a name for those), but what do you expect?

Despite his long storied career making shorts for MGM, Pete Smith only won two competitive Oscars. (He would receive an honorary award for all the Specialties in 1954, which I think was richly deserved.) His first win was for Penny Wisdom, which I haven't seen yet (we have to save something for ANOTHER Year in Shorts, after all). And his second win was for Quicker'n a Wink, and it's not hard to see why. A funny, educational and visually impressive short, Quicker'n a Wink could be called the platonic ideal for a Pete Smith Specialty, containing all of his usual strengths without the typical weaknesses. Really the only thing missing here are the silly sketches, which would have been out of place, and are terribly hit and miss besides. The technology on display is genuinely interesting, and Pete Smith's narration has never been better, containing some of his funniest lines and sharpest deliveries. While the Pete Smith Specialties have their flaws (to say the very least), they also have an undeniable charm and energy that keeps me coming back. And shorts like Quicker'n a Wink show that my faith was not in vain. Really, the only thing that keeps this from being my favorite of the series is that scene at the end with the guy's tooth getting drilled because why the fuck would you show that in slow motion, what the fuck is wrong with you Pete Smith????