Folks, I have a confession to make- I am pretty terrible at bowling. Just the worst. I remember the last time I went bowling, where scoring a measly forty points total was cause for celebration amongst my friends. But perhaps through the magic of cinema I can improve my game, on the off chance that anyone wants to bowl with me once the world reopens. It’s certainly worth a shot. And luckily for me, there just so happens to be an Oscar-nominated short which might do just the trick. And even better, Strikes and Spares is a Pete Smith Specialty. 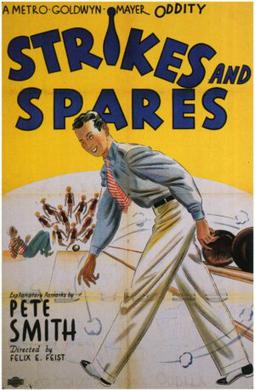 Directed by Felix E. Feist, Strikes and Spares is a decently entertaining and fairly educational 1934 short about bowling. The film spends a fair bit of time discussing the technical side of the sport, outlining the importance of proper technique and correct footwear. Feist's short demonstrates this in a variety of ways, mostly via a Goofus and Gallant-type showcase contrasting champion bowler Andy Varipapa with a ridiculous buffoon played by Buster Brodie. Feist also makes use of a multitude of editing techniques, catching Varipapa in slow motion to better show off his technique. And just to make it interesting, we also get a healthy dose of bowling tricks which aren't very educational but are pretty darn impressive. Of course, this being the 30s, the film also includes a bit of casual sexism and less-than-casual racism in the characterization of the pin boy (played by Ray Turner), which can make the short uncomfortable to watch (and probably explains why this one is a bit trickier to find). I'm not sure if this was a regular thing with the Pete Smith Specialties (of the ones I've seen, this is the only one that includes anything like that), but it's really unfortunate either way. It takes what's otherwise a fun showcase of a world class athlete and turns it into something ugly. 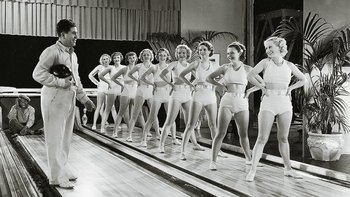 Why do I have such a soft spot for the Pete Smith Specialties? The world may never know. Perhaps it's the benefit of low expectations; at a glance, an educational short on bowling does not sound like something that would have much in the way of entertainment value. But Pete Smith always elevates his films with his energetic narration, and the way they use slow motion is fun and educational. If this film didn't indulge in some pretty hurtful stereotypes I'd be more willing to recommend it without reservation; the short is mostly pretty silly, and Varipapa is an amazing bowler. Just goes to show that prejudice runs deep; if a dumb little film about bowling isn't free of it, what is?