The movies are back, folks, and I, for one, couldn’t be happier. There are few things I love in this world more than sitting in a darkened theater to take in a motion picture. But there are few things I hate more than all the rude, entitled jackasses who seem to live to ruin that for other people. Whether it’s teenagers who use their phones, assholes who kick the backs of seats, or those two drunk old ladies who walked into the theater just as Portrait of a Lady on Fire was starting, loudly commenting on how quiet it was (gee, I wonder why???), then inexplicably decided they had to sit in the same row as my mother and me despite the empty rows in front of and behind us, forcing us to stand up, blocking other people’s views during the process, movie pests are a real and persistent issue, and have been for quite some time. Luckily for us, a short film was released in 1944 to teach us how to deal with those menaces to cinema. And luckily for me, Movie Pests just so happens to be a Pete Smith Specialty. (But seriously, not to be a snob, I expect some bad audience members when I see an Avengers movie in the multiplex or something, not when I’m catching a matinee of a French movie about lesbians at the arthouse theater, you know?) 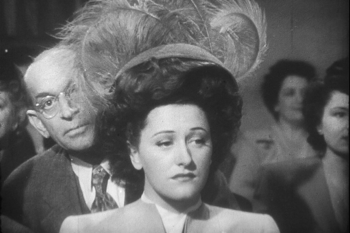 Like most of the Pete Smith Specialties, Movie Pests takes the form of a documentary narrated by the Smith named Pete himself. This particular short is directed by Will Jason, who directed a lot of films I've never heard of and wrote a lot of music for even more films I've never heard of. Movie Pests has ostensibly less educational value than the other Specialties we've covered, although I would argue it deals with a far more serious issue. Who needs to know about the history of radium or how Marines get trained? It's far more important to know how to recognize movie pests in the wild and what to do with them. Admittedly, some of the advice in the short is a little dated. This film was released in a time when people dressed up for the movies and showtimes were seen as more of a suggestion than a hard and fast rule (you can thank Alfred Hitchcock for changing that), so some of the problems seen here are not something we have to worry about much anymore. Indeed, if you're lucky enough to have a regular theater with assigned seating, a great deal of these issues are easily avoided. But that serves to make the film function not only as an instructional video but an important historical document, a stark reminder of how far we've come as a society. Still, there are some nuisances which are timeless, from noisy eaters to seat kickers. And thankfully, Movie Pests shows us just how to deal with people like that- severely and without mercy.

Aside from its value as a guide to dealing with the dregs of humanity, Movie Pests is also just a damn good piece of comedy. Regular readers will remember that I am a pretty big fan of Pete Smith's trademark delivery, and it's especially well-suited for a film like this. It's an important issue after all, so it's important to keep things light. But beyond Pete's narration, the film also features a great deal of fun physical comedy, with the action complementing the script perfectly. Admittedly, it may lack some of the visual flair found in the Specialties from the 30s, but it more than makes up by also not including any of the sexism or racism found in some of those films. All the humor in Movie Pests is just good-natured fun, at no one's expense except for the monsters who seek to ruin the moviegoing experience for the rest of us. And really, don't they have it coming? Movie Pests may not be the most revolutionary or exciting short, but it's just plain and simple fun, and what's wrong with that? While many of the Pete Smith Specialties might not have held up as well as I remembered, I think it's movies like this which justify the soft spot I have for them.