If you’ve ever read a ranked list of Best Picture winners (and if you’re reading this blog, I can only assume that you have), you’ll no doubt have noticed that consistently ranked near the bottom is Cecil B. DeMille’s The Greatest Show on Earth. It’s not hard to see why- the film is overlong, ridiculous and mostly just boring. And to make matters worse, it won Best Picture while Singin’ in the Rain wasn’t even nominated! Still, I’m inclined to be kinder towards The Greatest Show on Earth than most people are; for one thing, it has Jimmy Stewart playing a murderous clown long before Heath Ledger or Joaquin Phoenix proved your film could win Oscars for including one. And while The Greatest Show on Earth might be a three hour long infomercial, at least it’s an infomercial for a circus. In some ways, time may have made The Greatest Show on Earth a better movie now than it was on release. Those circus scenes provide a glimpse into the past, showcasing acts and performers that you just can’t see nowadays. Still, perhaps that sort of thing is better suited for a short film. And today’s short, 1932’s Swing High, certainly bears that out. 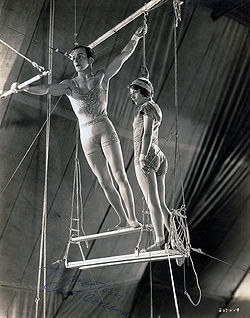 Directed by Jack Cummings, Swing High is the very first Pete Smith specialty produced for MGM. Remember Pete Smith? Well he's back, baby!!! The short features The Flying Codonas, who at the time were one of the biggest trapeze acts in the world. In the ten minute run time, the short showcases the Codonas (Alfredo Codona, his brother Lalo and his wife Vera) as they demonstrate all manner of impressive tricks, including Alfredo's trademark triple somersault. Not only does this film open up the act to a wider audience (both in geographical terms and also temporal ones- we're talking about this film almost ninety years later!), but it also allows us to see it from a new angle- literally. Thanks to the various camera angles and the magic of slow motion, we can get a better look at the artistry and athleticism that goes into these things than we could if we saw it live. Add Pete Smith's trademark snarky narration, and you've got the ingredients for a short that's fun and educational!

Unfortunately, things went south for the Codonas not long after this short was released. Only a year later, Alfredo suffered a career ending injury which led to a long period of mental decline. In 1937, Alfredo fatally shot himself and Vera during a divorce settlement. Show business is filled with stories like these, especially in those days, and it's always tragic when it happens. And it certainly casts a dark shadow over this film.

But in 1932, the Codonas were on top of the world. And within the ten minute runtime of Swing High, they always will be.