While I enjoy the Pete Smith Specialties, they are very much products of their time in ways that can not be ignored. Sometimes the aspects which make them uncomfortable are beyond the filmmaker’s control; other times, they are not. Today’s short, Menu, belongs in the latter camp. While it was no doubt intended to be seen as a bit of goofy fun, it definitely carries some attitudes which would have been best left in 1933. 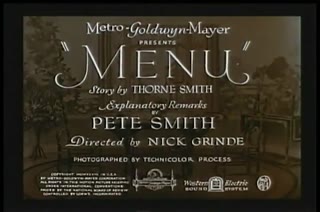 Menu tells the story of John Xavier Omsk (Franklin Pangborn), a man suffering from an upset stomach, the clear result of bad cooking. Luckily for Omsk, Pete Smith has the solution- no, not learning to cook for him damn self, but berating Mrs. Omsk (Tony Award winner Una Merkel) for her poor cooking skills. She's so hopeless, in fact, that Pete Smith has to bring in outside help in the form of Master Chef Bizetti (Luis Alberni) to teach Mrs. Omsk how to cook while she stands around and generally acts too dumb to live. Yes, it's one of those films. Which is unfortunate, because once you get past the casual sexism and fullhearted embrace of antiquated gender roles, Menu is a pretty funny and entertaining educational cooking film. Director Nick Grinde has his usual fun with editing tricks, Pete Smith's narration is exuberant and witty, and the whole thing flows pretty smoothly. You just have to put up with a lot of crap to get through it.

The more we look at these Pete Smith Specialties, the harder I find it to justify my feelings of fondness for them. And yet, they have this ineffable energy to them that brings me joy in spite of my misgivings. Not to mention it must be said that, as horribly written as her character may be, Una Merkel certainly gives it her all. I certainly was not surprised when I discovered that she went on to garner an Oscar nomination for herself (for the film Summer and Smoke, unseen by me). To whatever extent this short will work for you, her committed performance will certainly be responsible for that. Which I guess goes to show- if you're going to be horribly offensive, at least have the decency to do it well.