A Year in Shorts Day 319: "Audioscopiks"

Hey! You know what we haven’t talked about in awhile? A Pete Smith Specialty! You remember those, right? Those informational shorts which usually have an irreverent sense of humor and often contain an unfortunately high level of racism or sexism? Yeah, that’s the one. The last Specialty we covered was Movie Pests, which was high in hilarity and low in offensive content. Does today’s short, 1935’s Audioscopiks, have anything in common with that picture? 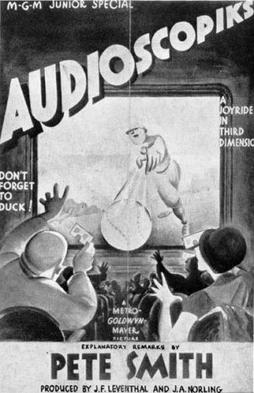 Directed by Jacob Leventhal and John Norling, Audioscopiks was created by MGM to show off the power of 3-D!!! (Just imagine my hand reaching out of the screen as you read this.) While the Golden Age of 3-D!!! wouldn't happen for another two decades, the ball needed to get rolling somehow, and shorts introducing the concept to general audiences is as good a method as any I suppose. (Audioscopiks does this in a pretty straightforward way, with a series of little vignettes built around throwing stuff out at the audience.) That makes Audioscopiks a rather interesting piece of film history. And that's good, seeing as how that's really just about the only interesting thing about Audioscopiks today. When 3-D!!! was still a novelty, I can see why this film would be a huge hit with audiences. But that sort of thing is old hat nowadays, and any novelty this short would have had has certainly worn off. Of course it doesn't help that, because I don't own a pair of 3-D!!! glasses, so I don't even have that going for me. Still, if you want to experience it for yourself, you can here on Vimeo. 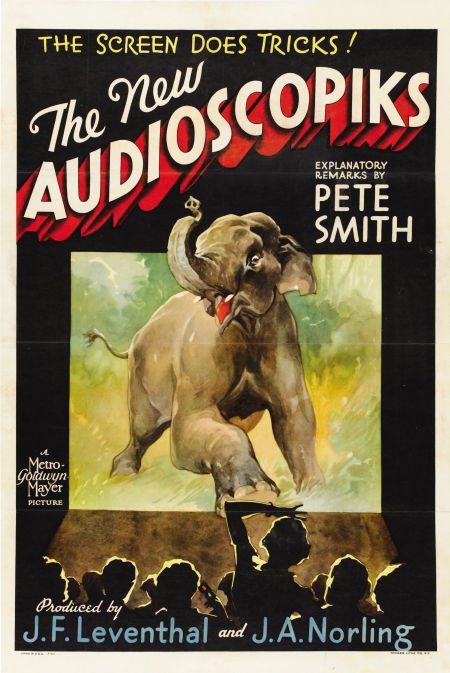 This poster is from the sequel, but- A)- There aren't a lot of available pictures for "Audiscopiks" online; and B)- This poster is fucking GORGEOUS and deserves to be seen!
(via IMDb)

But all things considered, it could be much worse. After all, at the end of the day it is still a Pete Smith Specialty, complete with all the good that entails. Smith's narration is as fun as ever, complete with his trademark goofy delivery, snarky asides and silly bits of wordplay. The running gag of Pete Smith not being able to stay "stereoscopic" might not be funny, but it's cute enough. It's not much, but it keeps the short perfectly watchable, no matter how dated it is. Unfortunately, part of that dated aspect includes a little bit of sexism, although not a whole lot. Pete Smith constantly objectifying some random women here and there isn't great, but it's certainly been a lot worse. I guess it helps that Smith, at least, seems aware of how gross he's being, with the joke being just as much on him (or, in one case, a hypothetical pervert in the audience) as it is on the ladies. There are also a couple of randomly horny moments sprinkled throughout, especially regarding women's feet. So hey if that's your thing, you might enjoy this! But it takes more than watchability and horniness to win an Oscar (or at least it should), and Audioscopiks couldn't manage to bring home the gold that year. Instead, the Oscar for Best Live Action Short Subject, Novelty (not to be confused with Best Live Action Short Subject, Comedy; boy that's a mouthful if there ever was one) went to Wings Over Everest. I haven't seen that film, but I imagine it holds up better than this one. A film showing off the beauty of Mount Everest definitely has a lot more to offer contemporary audiences than one showing off the power of 3-D!!!

This is Pete Smith's third (and final) 3-D film, "Third Dimensional Murder." Words cannot express my disappointment in the fact that it didn't get an Oscar nomination.
(via Wikipedia)

A part of me feels like it's wrong to review Audioscopiks that way, though. MGM didn't create it to be a film which would stand the test of time, after all. Hell, I don't even know if you can really call it a film. It's a tech demo more than anything, and I suppose we should treat it as such. The early years in the shorts categories saw a great number of films receiving Oscar nominations which, in hindsight, probably shouldn't have- propaganda films, newsreels and proofs-of-concepts. Still, the Academy decided to treat them as regular motion pictures, and so I guess we should too. And as far as those things go, you can do worse than Audioscopiks. In spite of its faults, it's got that Pete Smith charm, if (unfortunately) some of the Pete Smith shortcomings as well.