Experimental films are fun, aren’t they? They can be pretty damn weird, though. Heck, we’ve covered a few here ourselves! But experimental films aren’t all just art films and avant-garde montages, you know. Sometimes they can be relatively normal movies with one major change in form. Eugene Federonko’s Every Child is such a film. For the most part, it’s a fairly normal short- with one huge difference! 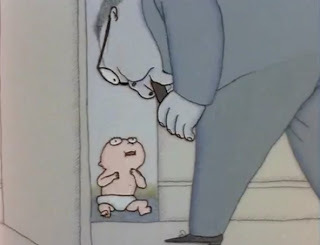 Released in 1979 by the National Film Board of Canada working in conjunction with UNICEF, Every Child is the brainchild of writer-producer Derek Lamb. It tells the story of a baby constantly being abandoned on doorsteps (happy stuff, right?), in a long quest to find a loving home. It's a strange enough short on its own, but what sets it apart is its sound design. I hope you like a cappella, because all of the sound effects are provided vocally by Les Mimes Electriques. If you're not a fan of a capella, this short might not be for you.

And for the most part, it's not really for me either. It's not bad or anything, but I just can't get quite get into it. Its heart is definitely in the right place, and it has a certain goofy sense of humor which I quite like, but ultimately it's a mixed bag The animation certainly has style, but it's often fairly unpleasant to look at. And while the sound effects are neat (and undeniably impressive), they can get a little annoying after awhile. It makes it stand out, but there's probably a reason that this short is unique in that regard. Still, maybe that was enough for the Academy, as Every Child won the Oscar that year. The 70s were an interesting and experimental time for animated shorts, often to pretty great results. This short isn't one of those times, but it's still worth a watch.