Something unexpected which this Year in Shorts has sparked in me is a desire to get into animation. Not professionally mind you (I don’t think I’ve got the talent or inclination), but it’s something I’ve recently realized I’d love to be able to do just for my own sake. I haven’t made up my mind on whether or not to pursue it yet, but it’s definitely something I’d consider. And if I went for it, among my many influences would be Dutch animator Michaël Dudok de Wit, director of today’s short, The Monk and the Fish. Released in 1994, The Monk and the Fish has a pretty simple setup- a monk spots a fish and becomes obsessed with catching it. While at first this results in some classic cartoon hijinks (imagine a more low key Looney Tunes short), it soon turns into something much weirder and weirdly profound. While the story may be a little episodic at times, the short still shows a keen understanding of the importance of comic escalation, as well as the comedic value of a sudden left turn into nonsense. And even if you don't find the short funny, you have to admit it's pretty to look at.

Most of the short's success can be attributed to Michaël Dudok de Wit's unique style of animation, which is both simple and appealing. His character design is not too complex, but it's effective, and perfect for conveying the extreme emotions of our constantly frustrated monk. More complex is de Wit's use of watercolors, which are consistently beautiful and make the film a constant treat for the eyes. Even with the lower quality copies available (either on YouTube or here at the Internet Archive), the film is still a pleasure to watch. And all of this works in tandem with Serge Bassett's Baroque-esque score, which both heightens the absurdity while also giving the whole thing an air of class. Hey, it worked for the Looney Tunes, and if it ain't Baroque, don't fix it. 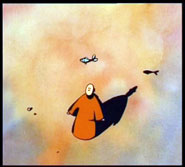 Still for all its charms, The Monk and the Fish couldn't quite land the Oscar win, losing instead to Alison Snowden and David Fine's short Bob's Birthday. Whether or not that win was well-deserved is a matter of persona preference; while Bob's Birthday may not be as visually appealing as The Monk and the Fish, it more than makes up for it in regards to its witty dialogue and clever construction. Some might argue that such things should be of secondary concern for an animated film, of course, but I'm not inclined to agree. Either way, both shorts are quality films and worthy of their nominations, which is certainly more than I can say for some of their competitors. But that's a story for another time.