There are a lot of things I don’t “get” but I still enjoy or appreciate to some degree. I don’t “get” the works of Luis Bunuel, but I find them interesting nevertheless. And while you can probably fill a thimble with all the things I truly understand about music, damn if I don’t have my fair share of opinions on it! All of this is to say that today’s short, the avant-garde collage film Very Nice, Very Nice is way over my head in terms of “getting” it. But I still like it quite a bit, and maybe you will too! 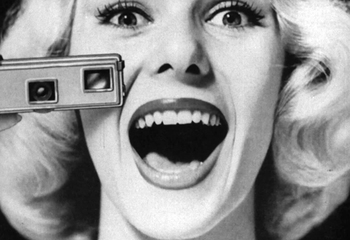 Arthur Lipsett's Very Nice, Very Nice is another film from our friends at the National Film Board of Canada released in 1961. It has kind of an interesting history behind it- Lipsett was an employee of the NFBC and as a hobby he liked to collect snippets of audio and stitch them together. Ok, maybe that's not interesting to you. But Lipsett's friends convinced him he should put that audio to images, in this case a series of stock photos, and thus a film was born. I think the real takeaway here is that Arthur Lipsett has the best friends in the world. They find out about his hobby, convince him to make it into a movie, and he winds up getting an Oscar nomination for it? That's next level friendship material.

As for the film itself, it's pretty remarkable. Despite the seemingly disparate nature of the audio and visuals, the whole thing flows together spectacularly, helped along by a bold and brassy score. The film covers all manner of topics, from love, hate, consumerism, war... really, just all of life itself, and does so in a way that's both light on its feet and surprisingly contemplative. The film manages to be serious and irreverent at the same time, which is certainly no mean feat. What you're left with is a wholly unique and enriching experience that's hard to really explain, but almost impossible not to enjoy. I'm not sure I could watch an entire feature of it, but at eight minutes it's just about right.

Lipsett's revolutionary editing style, which was tightly paced and meticulous, certainly attracted him a lot of attention. And it's not hard to see why. One big name fan of this film was none other than Stanley Kubrick, who liked it so much he offered Lipsett the job of editing the trailer for Dr. Strangelove. Somehow he managed to decline that offer, and Kubrick ended up editing the trailer himself.

Personal projects are often so idiosyncratic and seemingly weird that it's difficult to share them with people. Hell, I still feel a little weird sharing this blog with people, and trust me, The Great Oscar Baiter is one of my more normal hobbies. So there's something kind of amazing about the story behind Very Nice, Very Nice. Not only that one man's amusement could be turned into such a high quality film, but that he had people in his life who could recognize its potential. And while the Academy recognized it enough to nominate it, it unfortunately couldn't pull off the win. Maybe it was a little too avant-garde.

In Arthur Lipsett's tragically short life he made a number of films for the NFBC, none of which had the same level of success as Very Nice, Very Nice. But his influence can be felt through the industry to this day. One of his films, 21-87 was a big influence in the making of THX 1138, the directorial debut of none other than George Lucas. That's worth more than any statue in my book.