We’ve covered a wide variety of shorts lately, but they’ve all had one thing in common- they’ve been fairly easy to talk about. And where’s the fun in that? Whatever happened to the strange, experimental films that I drive myself nuts trying to come up with clever things to say about? Was that sentence even grammatically correct? Probably not! Who cares? It’s experimental! It’s time to talk about Tango! 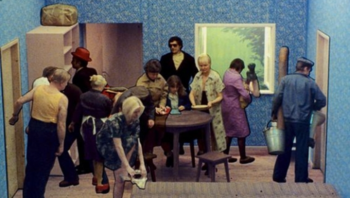 Tango is a 1981 Polish film from director Zbigniew Rybczynski, and it is... interesting. Unlike a lot of shorts we've covered lately, Tango doesn't really have a story. It's more just like eight minutes of vibes, with Rybczynski utilizing a unique form of pixilation (with cut out photos of people being animated against a background) to show a series of people repeating the same task within the same room, at the same time, without ever running into each other. That's honestly the best way I can describe it; as is always the case with shorts like these, Tango is best described by being allowed to speak for itself.

See, I told you it was interesting. And it's undeniably impressive! Like a lot of weird, hard to describe shorts we've covered, Tango mostly seems to exist as an opportunity for the director to show off, and in that area he certainly succeeds. I can't exactly tell you if it means anything, and frankly, I'm not sure it has to. A film can exist just for the sake of existing, and sometimes that's enough. It was certainly enough to win Tango an Oscar.

But it's not enough for me to really embrace it, I'm afraid. While the short is certainly an accomplishment, I think I need there to be something just a little more for me to latch on to. Especially if the film is going to be eight minutes long; after a certain point, Tango overstays its welcome. And keep in mind, this film beat The Snowman! That was a holiday classic, and despite being three times longer than Tango, it moves at a much better clip. Why the Academy chose to award Tango instead, we may never know. Maybe they're a bunch of Scrooges who hate Christmas. Maybe they just liked the technical achievement of Tango better. Or maybe they just wanted to award a film that they could simply vibe with.