Auteur theory remains a hotly debated topic amongst cinephiles to this day, and like all debates among cinephiles, it’s very annoying and everyone is way too hostile about it for no good reason. For my money, auteur theory was perfectly fine when the French came up with it, but then the Americans got their greasy hands on it and ruined everything, which is their wont. Exactly who gets to be an auteur and what it means may never be fully settled. But if anyone deserves the title, it’d be John Minnis, the man who directed, wrote, produced, starred in and animated today’s short, Charade. And on top of all that, he won an Oscar for the damn thing! 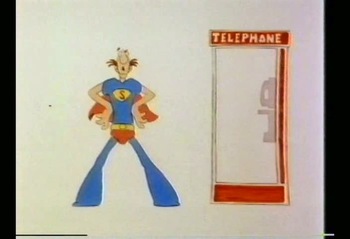 Made over three months while Minnis was in college and released in 1984, Charade tells the story of a rather silly game of charades, in which one extremely talented man is forced to play with a group of rather dull British people. The whole thing is mostly an excuse for John Minnis to show off his skills as an animator, and while it may not be as successful in that department as Your Face, it's still a pretty fun time. Minnis is clearly a talented guy, and Charade showcases it perfectly, allowing him to draw pretty much whatever he wants while also doing silly voices, which is pretty much the dream.

Charade might not be a great short, but it's a delightfully silly one, and that's all it wants to be. One could argue that it goes on a bit longer than it needs to (the central joke is pretty simple and doesn't require much in the way of reinforcement), but too much of a good thing is still a good thing. When our Year in Shorts ends, Charade won't be a film I remember as one of my favorites. But I'll remember it fondly nevertheless as a short that made me smile. Hopefully you will too!