Happy Valentine’s Day, fellow Oscar Baiters! Here’s to hoping you’re spending the day with someone very special! And if, like me, you don’t have someone special in your life, I hope you fill that void in your life by watching romantic movies and crying happy tears. And there aren’t many films better suited for that purpose than today’s short, John Kahrs’ Paperman. 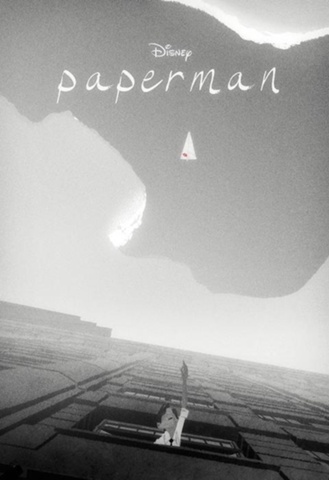 Released in 2012 to play before Wreck-It Ralph, Paperman follows the story of George, an office worker who has a chance encounter with a pretty young woman named Meg which unfortunately gets interrupted. Fate seems to intervene when George discovers his paramour interviewing for a job across the street from him while he's at work, and he tries to get her attention with some well thrown paper airplanes. Heartwarming hilarity ensues. 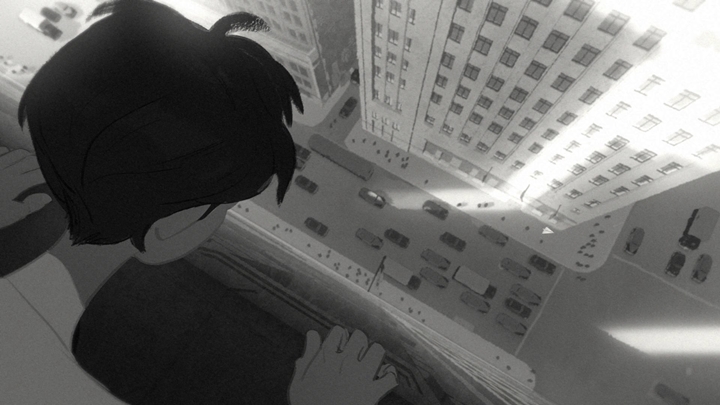 Paperman's story was developed by John Kahrs when he was working for Blue Sky Studios. By sheer, unhappy coincidence, Disney shut down Blue Sky Studios last week, yet another casualty in their acquisition of 20th Century Fox. It should come as no surprise by now that Disney is an evil, soulless corporation hellbent on having a monopoly on your childhood memories (which makes them just about the same as any other corporation), but it's always unpleasant when that fact results in the loss of jobs and art. And that unpleasantness is especially unfortunate to have hanging over your head when you have to write an entire post about how great one of their films is.

But that's just the nature of film criticism (or whatever the hell it is we do here), and it's not as if John Kahrs has any control over what Disney does or doesn't do with its obscene amounts of money. And there's a lot going on in Paperman that's worth celebrating. The most noteworthy aspect of it, of course, is the animation, a blend of 2-D and 3-D using Brian Whited's Meander system. The result is a gorgeous short, combining the elasticity and warmth of hand drawn animation with the depth and stability of computer images.

But even beyond the technical level, the film just looks great. I almost never talk about the cinematography when discussing animated shorts, but I really have to single it out here. Kahrs and his team manage to make a bleak urban landscape look beautiful, thanks in no small part to the choice to make the film (mostly) black and white, which perfectly complements Paperman's excellent use of shadows. Lighting is not something one typically pays attention to in an animated film (or, indeed, ninety-nine percent of movies released over the past decade), but Paperman shows what a difference it can make. Plus, you know I have to give extra credit to a film that chooses to be in black and white. At this point, that should go without saying. 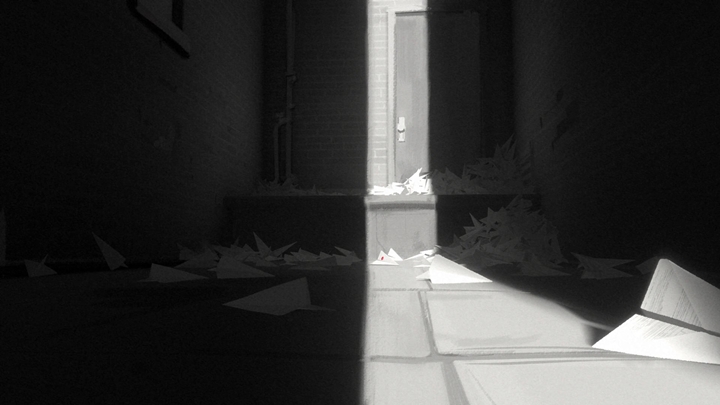 But as I always say, aesthetic isn't everything, and Paperman wouldn't be nearly as enjoyable to watch if its visuals were in service of a story that doesn't deserve them. Luckily, Paperman belongs to the Stutterer school of filmmaking, giving us a simple story told well. Without any real scenes of dialogue, the film relies mostly on its character animation to sell the romance. I suppose one could say that the film doesn't really break the mold in terms of character design (Meg has the same big eyes as Elsa or Rapunzel), but I don't necessarily think that's a bad thing. Disney has stuck with that aesthetic for a reason, and the reason is that it works. Large eyes are very expressive, and that's extremely important in a short like this. And George's lanky body allows for some entertaining physical comedy, especially when his paper airplanes gain a life of their own. The film's comedy is never over the top hilarious, but it's consistently sweet and always entertaining. It's sort of like City Lights with magical realism. Ooh, City Lights! That's another movie for my fellow sadsacks to watch today.

Look at this! How can you not want to watch this?

But the film Paperman most reminds me of is Billy Wilder's masterpiece, The Apartment. Beyond the aesthetic similarities (you want to talk about a romantic comedy that makes great use of shadows, you have to talk about The Apartment; that thing looks like a film noir at times), the films have a nice thematic connection, too. As George throws away the papers he's supposed to be working with to get Meg's attention, the film reminds us that love is far more important than work, especially in a job you clearly hate. That sounds like a pretty simple (even trite) message, but it's sadly relevant, especially in American society. Too often we focus on success in our careers over things that really matter. Well, when I say "we", I more mean "other people." I've been unemployed for nearly a year after being furloughed from my part time job working at a bookstore. Career success has arguably been too unimportant for me. I blame movies like The Apartment for turning me into an insufferable romantic.

It may not be the deepest or most complex of movie romances, but what do you expect at six and a half minutes? Paperman is a story of the magic of first encounters, the heartache of missed opportunities and the thrilling fantasy of getting a second chance. It's a different kind of Disney magic, and there's something utterly heartwarming about it.

Paperman has received some criticism from people in the past for being yet another in a series of animated shorts featuring stories about two straight people falling in love. Heck, Disney would win another Oscar for a short film that basically did the same thing, and Pixar seems to love making shorts about inanimate objects having heterosexual romances. They made a short film about volcanoes falling in love for Pete's sake. Volcanoes!

Still, if I may be allowed to make a controversial statement for a second- straight people deserve love just as much as the rest of us, and it's ok for them to have romance movies. And yes, it would be nice if there were a bit more parity in terms of representation, but that's a systemic issue that we shouldn't take out on one film. And especially not a film with so much to love about it as Paperman.

I have always hated Valentine's Day. Even when I was in a relationship, I always considered it a corporate holiday designed to add a monetary incentive to people's affections (I was very popular in high school). And God knows the last few years have done nothing to improve my opinion of it. And yet, despite all my world weary cynicism and love of ironic distance, I'm still a stupid romantic at heart. And every now and then, a film comes along which breaks through all my defenses and reminds me that falling in love may be scary and uncertain, but it can also be exciting and wonderful. Paperman is one of those films. And I'm grateful to have it.

"Paperman" is NOT streaming on Disney + because who knows why Disney does anything anymore?