I was finally able to catch Kenneth Branagh’s Belfast this weekend, and I have to say it certainly lived up to the hype. There’s a lot to love about this movie, from the gorgeous black-and-white cinematography, the exquisite performances from both the seasoned veterans and newcomers in the cast, to a script that’s brimming with heart and humor. But one aspect of the film I don’t see a lot of people mention is the way it incorporates footage from other films- most notably Fred Zinnemann’s High Noon, using not only a scene from the movie itself but scoring two pivotal scenes with the film’s theme song, the aptly-named (and Oscar-winning) “The Ballad of High Noon.” It was a bold choice to be sure, but who could blame Branagh? It’s a great movie, and a great song- and the subject for today’s installment in Song of the Week. 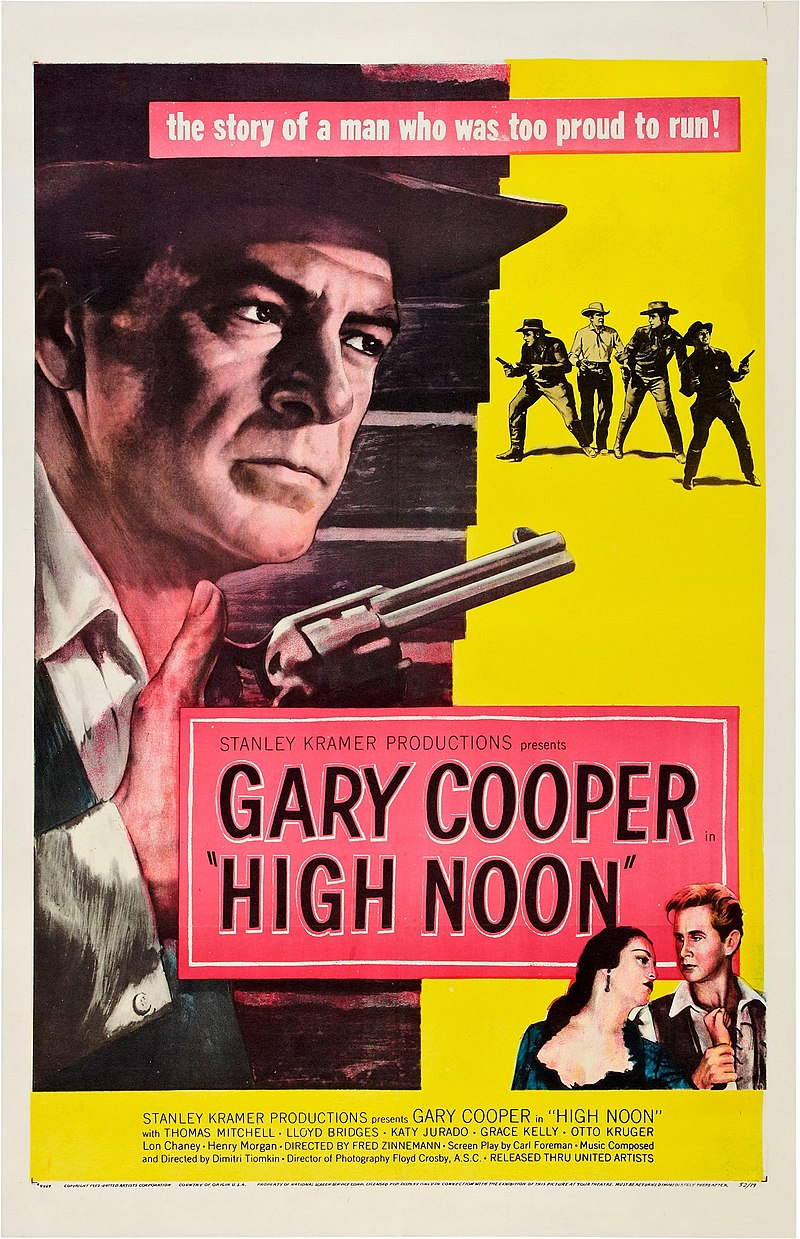 For those of you haven't seen High Noon... well, you really should get on that, it's a classic! Aside from being a taut, tightly edited thriller and a brutal deconstruction of a typical Hollywood Western, the film is also a searing indictment of McCarthyism, made all the more potent by the fact that Carl Foreman, the screenwriter, wound up being blacklisted during the film's production. This is typically the part where I might go into a more detailed plot summary of the film, but it's unnecessary- why tell you the premise when the theme song does a good job of summing it up instead? Yes, "The Ballad of High Noon" (also called "High Noon" or "Do Not Forsake Me, Oh My Darling") is an early example of the "Theme Song Which Explains the Premise of the Movie" genre of songwriting. These sorts of songs had their heyday around the turn of the Willennium, with such hit songs as "Men in Black" and "Wild Wild West", but have been around for about as long as there have been talkies. Think back to all the old Disney movies with those storybook opening sequences set to a song setting up the plot of the movie. "The Ballad of High Noon" is in a similar vein, first playing over the opening credits, thereby setting up the movie's tone and plot pretty much perfectly.

Much like the film itself, which had a fairly low budget for a Western released in those days, "The Ballad of High Noon" is a pretty sparse affair. With music by Dmitri Tiomkin and lyrics by Ned Washington, the song was written to invoke an old folk tune. To achieve this, Tiomkin utilized a stripped down arrangement, with Tex Ritter's vocals accompanied by only a few instruments, including an early synthesizer for the percussion. (Typically I'm against the use of synthesizers in scores for non-sci-fi or horror flicks, but clearly there are exceptions which prove the rule.) The lyrics themselves are pretty blunt and straightforward, with less focus on poetic language or colorful metaphors than we see in most songwriting. This simple approach extends to Ritter's singing as well; this isn't a song meant to show off its singers range, with many lines essentially being the same note repeated. In a lot of songs, all of this might be a source of criticism. But the simplicity all works in the song's favor, giving the whole thing an authentic sound- if you didn't know better, you might think the song's a genuine Old West ballad. Besides, the song is supposed to be told from the point of view of a Gary Cooper character; a less showy performance is more than called for in this case. Right from the opening shot, "The Ballad of High Noon" lets you know what kind of movie you're in for- the simplicity of the arrangement tells you it's not going to be an overly complicated movie; the lyrics and vocals tell you everything you need to know about the plot and main character; and the constant percussive beat hints towards the ticking clock nature of the narrative. Sure, there are details to be sketched in later, but it's a great overture. Honestly my only complaint is the fact that, due to the cruel passage of time, hearing the lyric "Shoot Frank Miller dead" has become pretty funny to hear out of context. Granted, if there were any comic creator I'd expect to become a violent outlaw, Frank Miller would probably be the one. 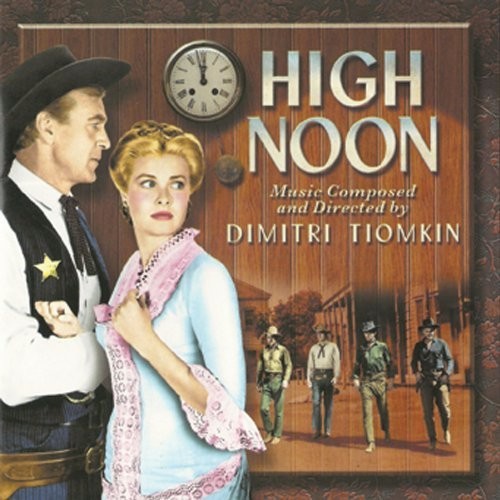 However, the opening credits aren't the only time you'll be hearing "The Ballad of High Noon." The song serves as the backbone of the film's sound, being sung at pivotal points of the film, while the melody is repeated throughout the score. It's a simple trick, but one I always appreciate when it's employed; Casino Royale did the same thing with its theme song "You Know My Name" (also bafflingly ignored by the Academy), and that was just one of the many things which made that film so great. Of course, the song was probably a bit easier to incorporate into the score because Tiomkin was also the film's composer. Once again, this is a creative choice that could have easily gone wrong- if the song was bad, hearing it over and over again might have ruined the film. And even a great song can become annoying if overused, as anyone who has seen The Graduate can tell you. (No, please, I love hearing "Scarborough Fair" over and over again, that's not annoying at all!) But there's something about the way "The Ballad of High Noon" is used that makes it consistently effective. Perhaps there's just something about Westerns that make us more accepting of that sort of thing. Maybe it's the way the song sounds on a single harmonica which perfectly captures the tone of the film and the mental state of Marshal Will Kane. Or maybe it's just that the film is so short there's simply no time for the song to overstay its welcome. Whatever the case, the song and the score are clearly inseparable from each other, and it's no wonder that Tiomkin won an Oscar for both. 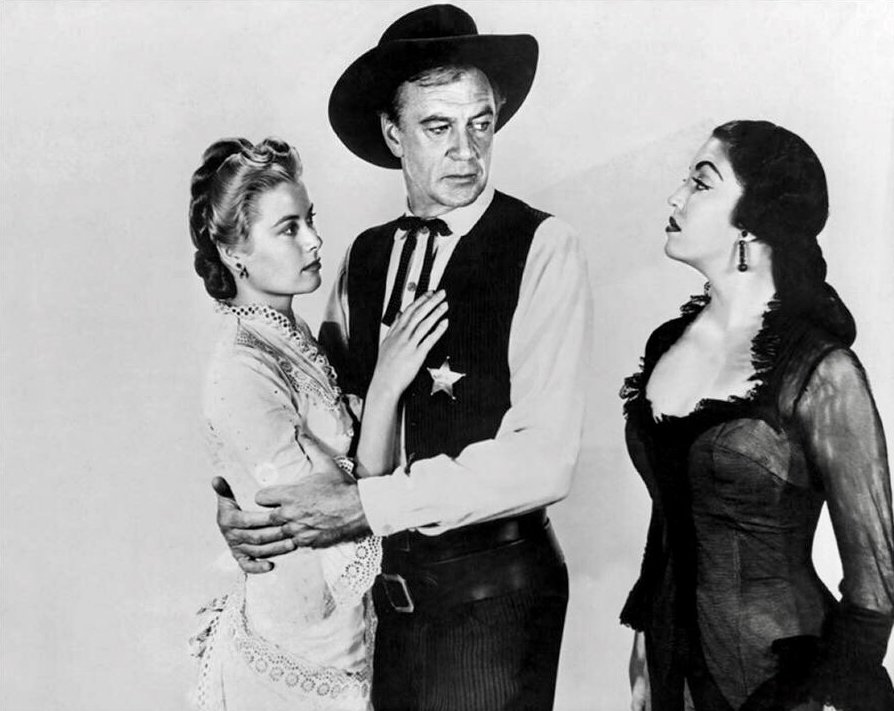 The Academy made a remarkable amount of questionable decisions at the 25th Academy Awards. Awarding The Greatest Show on Earth Best Picture was one. Giving Best Documentary Short to a short film that wasn't a documentary was another. And don't even get me started on the paltry two nominations given to Singin' in the Rain! Nevertheless, at the very least we can all agree that every award received by High Noon was well-deserved. Gary Cooper's performance is iconic, the editing by Elmo Williams and Harry W. Gerstad is a master class in the technique, and Tiomkin's score and song were invaluable contributions to the film. (Which is not to shortchange the lyrics by Ned Washington, of course, only to say that I think Tiomkin's scoring really makes the song what it is.) I am, admittedly, unfamiliar with the songs "The Ballad of High Noon" beat for the Oscar, and I imagine most people are as well. Does anyone remember Son of Paleface or Hans Christian Andersen in general, let alone their music? Honestly, the only song from any movie that year which has "The Ballad of High Noon" beat in terms of cultural impact was "Make 'Em Laugh" from Singin' in the Rain, and let's be frank here- nominating that for Best Original Song would have been one of the biggest bold-faced lies in the history of the Academy.

Of course, cultural legacy isn't everything when it comes to which film should win an Oscar, and obviously that sort of thing is impossible to predict in the moment. Still, I think it's nevertheless a pretty good indicator when it comes to the music categories. When you learn that "The Rainbow Connection" or "Gotta Fly Now" didn't actually win an Oscar in the years they were released, doesn't that just seem horribly wrong? Sometimes these songs can take on a life of their own completely outside of their film (did you know "Baby It's Cold Outside" was from a movie?), but often a great song can help insure a film's longevity. And as long as people keep humming "The Ballad of High Noon" (or directors keep homaging it), High Noon is a film that will be with us for a long time. God knows we need it.