A Year in Shorts Day 62: "Neighbours"

Boy, and I thought The Bead Game was hard to talk about. But that was a walk in the park compared to Neighbours, which I think it’s fair to say is definitely the weirdest short we’ve covered so far. And yet I think it’s easy to argue that it’s simultaneously one of the best. And really, what better way to kick off the new year?

There's actually a lot of similarities between The Bead Game and Neighbours. Both were released by the National Film Board of Canada. Both are anti-war shorts. And both feature stop motion animation. The difference is that The Bead Game used beads for its animation; Neighbours used people, in a process you may recall is known as "pixilation." And if that doesn't sound weird enough to you, the NFBC has uploaded the whole thing to Vimeo to prove you wrong. 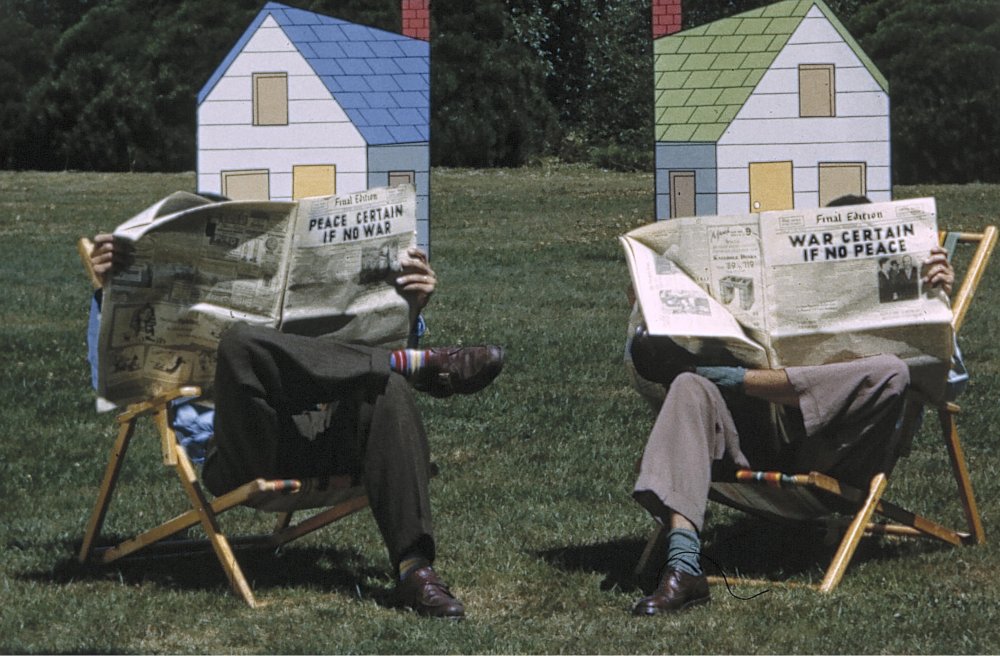 So yeah, kind of a weird short, isn't it? Director Norman McLaren definitely had an odd sense of humor, but also an undeniable visual style and mastery of his craft. The pixilation technique allows for some great visual gags while also adding a layer of artifice which prevents the short from becoming too dark. And hey, you know what? I've got an odd sense of humor too, and this short is definitely right up my alley. I suppose if you're not into absurd, dark comedy, this might not be for you. But honestly, why wouldn't you want to watch a film about two men committing extreme acts of violence over a flower? What else is cinema for? 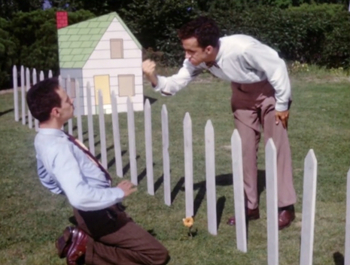 Neighbours certainly isn't subtle about its point, but subtlety isn't everything. And it certainly has no place in this film, which just swings for the fences in just about every way it can. Special note should go to McLaren's strange score (apparently created by scratching the edge of the film), which certainly adds to the film's already intense surreal quality. And much like with The Bead Game, McLaren understands the importance of good story structure. It may be a weird short, but it's easy to follow, it's well-paced and the film doesn't overwhelm you with its strangeness. There's a fine art to making absurdist cinema, and McLaren was particularly good at what he did. 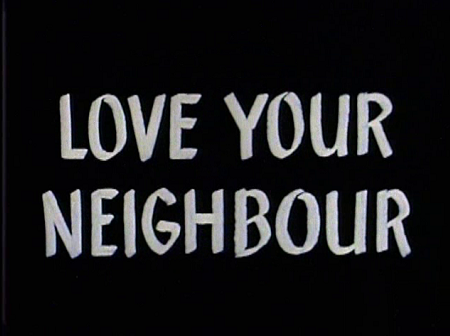 Also of note is that Neighbours is the first short we've covered so far (and quite possibly the only short we'll ever cover) to be nominated in two categories- Best Live Action Short and Best Documentary Short. Bizarrely, the film would win in the latter category, despite, objectively, not being a documentary. But really, doesn't that just fit in with the whole thing perfectly? Neighbours is a profoudnly strange film, and frankly, I wouldn't want it any other way.