In recent years Spain has taken prominence in the world of animation, perhaps most notably with Sergio Pablos’ Klaus. (If you haven’t seen Klaus, schedule it for this year’s Christmas viewing!) What kicked off this upwards trend, I have no idea. But I do know the first Spanish animated film to receive attention from the Academy was today’s short, Javier Recio Gracia’s The Lady and the Reaper. 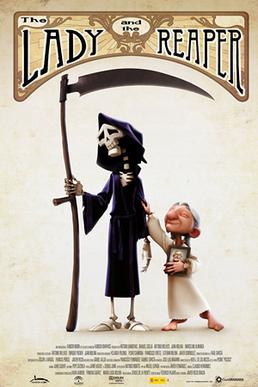 Released in 2009 and produced by none other than Antonio Banderas, The Lady and the Reaper is the heartwarming story of an old woman who really just wants to die and the damn doctor who refuses to let her. (It makes sense in context, ok?) What follows is a battle of the wills between the confident doctor and the easily frustrated Grim Reaper, who engage in a sometimes literal tug-of-war with the woman's soul. Like a lot of the shorts we've covered the past couple of days, The Lady and the Reaper combines an old school sense of humor with modern animation styles. (I swear, I don't do these things on purpose.) The film is packed to the brim with all manner of physical comedy, from pratfalls, chase sequences and, of course, explosions. It's all incredibly silly stuff, but it's so energetic and fast-paced that it's consistently enjoyable, even if it never quite reaches the heights of hilarity to which it clearly aspires.

Watching both of them in the same week, I'm struck by the multitude of similarities between The Lady and the Reaper and This Way Up; it's honestly a little eerie! And while both shorts are pretty good, I think the slight edge has to go to today's film. While the computer animation in The Lady and the Reaper may not be the mostly strictly polished (and can look a little cheap in many places), it overcomes that limitation more effectively than This Way Up by employing more creative visuals. Rather than employing a rather dull palette like we saw in that previous short, The Lady and the Reaper is filled with color, which certainly makes up for a lot. Moody shades of blue and bright hues of red enhance a lot of scenes, making them both fun to watch and nice to look at. And there's certainly a lot of style here, especially in the character design on the Reaper, with his nicely angular skeleton face and expressive body language. It might not sound like a lot, but little things like this can make a difference!

Aside from that, there's not much else to say about The Lady and the Reaper. It's just a fun and silly little short with some neat visuals, and what more do you need? And unlike the short it lost to that year, it doesn't overstay its welcome! That's certainly something we can all appreciate. After all, our time on Earth is precious. Why waste it by stretching a short past the breaking point?