I had a lot to say about this year’s Academy Awards ceremony, very little of it positive. But the absolute worst thing about it (aside from the boneheaded decision to move Best Actor to the end of the ceremony) was the lack of clips. Aside from a few categories, the awards show meant to celebrate the movies did very little to actually celebrate the movies. But the films affected the worst by this were the shorts. By far the least seen of any of the nominees, nominated shorts rely on the exposure offered by the Oscars to get audience interest. I remember seeing clips from Logorama and really wanting to see it, for example. Admittedly, I didn’t care much for the short when I finally saw it, but still. 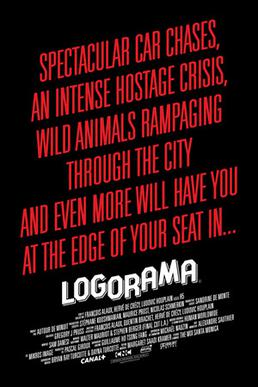 Directed by Francois Alaux, Herve de Crecy and Ludovic Houplain, Logorama is a French satire from the year 2009, set in a world where everything and everyone is a logo or a mascot. It follows a Michelin Man (Bob Stephenson) who is also a police officer as he chases down a violent Ronald McDonald (also Bob Stephenson) in order to stop his crime spree. It's sort of like if Foodfight were for adults. Well, intentionally for adults anyway. Regardless, what follows is a pretty remarkable short, at least from a visual perspective. The use of the logos is consistently clever, and the source of a great deal of sight gags and visual puns. Whatever you may think of the film, it's worth checking out just for that alone.

Unfortunately, I can't really recommend it for much beyond that. For one thing, it's far too long. This is simply not a premise that can support a sixteen minute runtime, and the short relies on a great deal of padding to make up for it, most of which takes the form of acts of random violence. And the humor beyond the visual puns is pretty lousy, a lot of edginess for its own sake. That type of comedy was big in the 2000s I suppose, but it hasn't aged well. It's a very abrasive and unpleasant film, and not one you want to sit with for too long. Which, again, you have to, because it's sixteen minutes! I don't want to make it seem like I'm against dark humor; I'm really not. I can laugh at some bleak things. But there needs to be wit to pull that off, and Logorama lacks that.

Still, I think it's worth a watch, even if the novelty eventually wears off. I don't think it deserved the Oscar that year, but I suppose it's alright that it did. At least it's clever, and that's not nothing. Plus, how many animated shorts can say they have David Fincher voicing the Pringles mascot? Not many, I'd wager!