At the risk of sounding hyperbolic, I think Ludwig Bemelmans’ Madeline books are quite possibly the most beautiful children’s books of all time. The stories may not always be spectacular (and can be, on occasion, somewhat offensive), but you can not deny the sheer artistry on display in Bemelmans’ illustrations. Every time I open one of those books all I want to do is jump in and let the world they create surround me. But unfortunately, that’s “physically impossible”, so we’ll just have to settle for the next best thing- today’s short, the 1952 film Madeline. 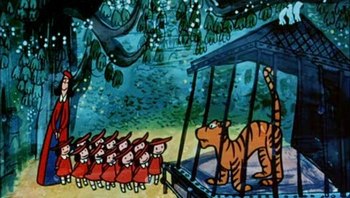 Robert Cannon is certainly not a household name, but he's at least become a fixture here in our Year in Shorts. A regular animator and director for UPA, Cannon is on hand once again to provide UPA's signature style of limited animation to the world of Madeline. Based very closely on the first book in the series (using its rhyming narration for its script as well as basing most of its imagery directly on the book's illustrations), Madeline feels less like an adaptation than it is simply watching the book occur on screen. (I know those two concepts sound more or less like the same thing, but there is a difference. Think Ang Lee's Sense and Sensibility compared to the BBC version of Pride and Prejudice and you'll get a sense of what I mean.) At times it feels like a glorified motion comic, with characters performing as little movement as possible in front of painted backgrounds. I suppose for some people that might not be enough for a movie, let alone an Oscar-nominated one. After all, no one gives Oscars to motion comics, do they? Lord knows I've been critical of shorts like these in the past. And yet, I can't help but be utterly charmed by Madeline. Who wouldn't be? Bemelmans' backgrounds are as gorgeous in animation as they are in print, and Gladys Holland's narration brings his prose to life with energy and warmth. What more do you really need from a cartoon?

I may be slightly biased. While I did not, to the best of my knowledge, grow up with the Madeline books, I *did* grow up with a Madeline cartoon. When I was a kid we had a video which contained various short films based on children's books- an extremely charming and action-packed live action adaptation of Corduroy, an animated Danny and the Dinosaur, and some other short I've totally forgotten about, but I'm pretty sure involved pigs? But also on that VHS was an adaptation of what I can only assume is Madeline's Rescue (I distinctly remember Madeline swearing vengeance against Lord Cucuface), although the only adaptations of that short I can find online don't seem to fit my recollections of it. I suppose I could be mistaken, but my memories of that short put it very much in line with this one, and it certainly captured my imagination. And I suppose it captures my imagination to this day. Is it foolish to theorize that there might be a straight line from growing up watching that tape on repeat to my current quest to spend a year watching various short films?

Whatever the case may be, Robert Cannon's Madeline taps in to a deep, nostalgic part of my soul, and it's always a pleasure for me to watch it. It may not be the best short (it certainly doesn't seem to be very popular), but I love it, and at the end of the day that's really all that matters. Unfortunately that doesn't seem to be what mattered to the Academy, with Madeline losing the award to Johann Mouse. That was certainly a good short, although it wasn't Tom and Jerry's best. Although it's interesting to note that the thing about that short I liked the most- the backgrounds- vaguely reminded me of the work of Ludwig Bemelmans. Coincidence? Absolutely. Still, it's interesting to think about, and perhaps that provides you an important glimpse into what it takes into making me like your short. Aspiring filmmakers take note! If you want to get the love and adulation from an obscure blog about the Academy Awards (and really, why else would you make a movie?), make sure it has some nice backgrounds!