The history of Oswald the Lucky Rabbit is a rather long and complicated one, deserving of a blog post all its own. But long story short- Oswald was created by Walt Disney and Ub Iwerks, with the pair of them and their team animating shorts for Universal Studios under Charles Mintz. A contract dispute between Disney and Mintz left with the former quitting the studio, with the latter retaining control of Oswald and most of Walt’s animators. This inspired Walt to create a character of his own, and thus Mickey Mouse was born. (One can only assume this is also what inspired the Disney corporation to try and own every intellectual property under the sun, as some form of elaborate revenge against the world.) Eventually, ownership of Oswald would return home to Disney, as commemorated in the video game Epic Mickey, a game I own but never finished. Today’s blog post has very little to do with Oswald’s legal history OR conceptually interesting but executionally flawed games, but I thought I’d bring them up for a little bit of context. Besides, either of those things are significantly more interesting than what we’re ACTUALLY talking about, the 1933 short The Merry Old Soul. 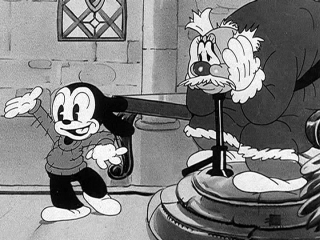 One more important piece of Oswald history to know is that by the time The Merry Old Soul was released, Charles Mintz had been fired, with Universal taking a more direct control of the character. The creation of Oswald cartoons was now entrusted to- you'll never believe this- Walter Lantz productions. You know sometimes I feel bad for calling Lantz the Poor Man's Walt Disney, but I feel like he brought in on himself with this one. The Merry Old Soul (which was directed by Lantz himself along with Bill Nolan) is inspired by the nursery rhyme "Old King Cole", with Oswald hearing about the titular monarch having the blues while at a particularly grueling dentist's appointment. Oswald, being a well-meaning, if not particularly original, individual decides the best way to do this is with a bunch of celebrity cameos. And hey, who wouldn't be cheered up by a visit from the likes of Laurel and Hardy, Charlie Chaplin, Harold Lloyd, Buster Keaton Mae West (???) or the Marx Brothers? (The idea of the Marx Brothers being enlisted to cheer up Old King Cole is one that would be recycled for Disney's Mother Goose Goes Hollywood, no doubt under the belief that turnabout is fair play.) I would probably be less cheered up by a visit from Al Jolson in black face, but I guess that's just the changing of the times.

Celebrity cameos can be fun, of course, but typically only when the celebrity actually makes an appearance. Would the Orson Welles cameo in The Muppet Movie have been nearly as funny with an Orson Welles impersonator? Absolutely not! And yet apparently 1930s audiences couldn't get enough of cartoons featuring characters drawn to resemble famous people! I can't say I see the appeal, although I guess it's not very different from a film like Ready Player One or Space Jam: A New Legacy; the thrill of seeing things that remind you of other things you liked without having anything in common with the actual thing is enough for some people, I suppose. Still, it's not as if these kinds of things can't be done well. The Muppet Movie is hilarious even if you don't recognize all the people making a cameo appearance; I barely knew who any of them were when I was a kid, and I still loved that movie. And films like The LEGO Movie or Who Framed Roger Rabbit showed that having a bunch of familiar characters interact with one another can produce some truly fantastic results. But of course those films all had something going on beyond just their basic concept, and The Merry Old Soul really doesn't. 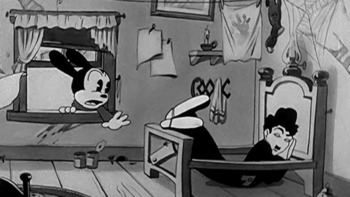 There are some things to like, sure. The animation is good, and the short is filled with the random type of gags you'd expect from a 30s cartoon. You know what I mean- anthropomorphized inanimate objects, pie fights, someone trying to hang the main character. That kind of thing. I typically enjoy those types of gags, but it obviously helps when they're actually funny. And while I can admire the zany energy in The Merry Old Soul, it simply doesn't make me laugh. The celebrity cameos are just annoying, and the other gags are pretty basic. Combine that with a pretty annoying song which makes up most of the short's runtime, and you've got a recipe for a film that really doesn't have anything for anyone. I suppose I can't say that it's terrible, it's just not good. Which describes... well pretty much every Walter Lantz cartoon we've covered. Maybe the man made some classics, I genuinely don't know. But if he did, the Academy certainly didn't nominate them. Instead, they continued to do what we've seen them do time and time again- recognize something you've seen done much better elsewhere. Still, Disney would have the last laugh that year. Continuing his early dominance in the category, Walt Disney would win the Best Animated Feature Oscar for Three Little Pigs, although I have to admit it would have been pretty great if his other nominee had won that year. I mean we all know that Oswald lost to Mickey Mouse anyway, but it would have been nice to just go ahead and make it official.