While Disney (and, by extension, Pixar) has a tendency to dominate in the animated categories at the Oscars, their recent success has nothing compared to their hot streak in the 1930s. For the first eight years in the history of Best Animated Short (back when it was called Best Short Subject, Cartoon), Disney reigned supreme. Of course, they didn’t just have mastery over the Academy either. No, Disney’s shorts also did very well at the box office too (although, again, I’m not exactly sure how one measures that). And no short of theirs did better than today’s film, the 1933 Silly Symphony, Three Little Pigs. 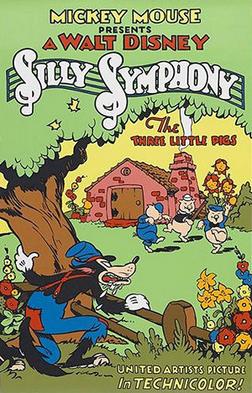 It should come as absolutely no surprise to anyone that Three Little Pigs (which was directed by Burt Gillett, not that anyone ever remembers that) is based on the classic fairy tale. In fact it's almost insulting that I felt I had to bring it up. As such, there's really no reason to go into the story and we can just jump into what it was that made this short so special. You see, Three Little Pigs is considered a very important short by some very important people. Chuck Jones himself thought so, arguing that this was the first time "that anybody had brought characters to life. They were three characters who looked alike and acted differently." And while this is probably a bit of an oversimplification, there is definitely something to that. Prior to Three Little Pigs, cartoon characters were pretty two-dimensional. The characters in Three Little Pigs had clearly defined personalities, which not only came across through dialogue but the animation. Also setting Three Little Pigs apart from earlier shorts was the linear story; while it seems commonplace now, most cartoons before then were just surreal and comical little pieces. I'm not an animation historian so I can't say if it's accurate to say it's the first, but it was certainly one of them. And it's major financial success no doubt contributed to other animated shorts following suit.

Similarly important is the music. Whereas a lot of early cartoons just used sample scores or pre-existing classical music for their soundtrack, Carl W. Stalling wrote an original score for Three Little Pigs. And of course, who hasn't heard the classic song, "Who's Afraid of the Big Bad Wolf?" Frank Churchill's tune was a massive hit (the first for the studio), going on to be a minor anthem during the Depression and World War II. And how many Disney songs can say they inspired the title for an Edward Albee play? The Academy Award for Best Original Song wasn't introduced until the following year, but had it existed, I wouldn't be surprised if Three Little Pigs managed to score a nomination. I wouldn't even be surprised if it had won!

Of course, as I always say, there is a difference between an important film and a good one. This is a film review blog, not a film history blog. But I think Three Little Pigs holds up pretty well. It's not my favorite Silly Symphony (hell, it's not even my favorite Symphony from that year), but it's damn entertaining. It might not be the funniest short, but the Silly Symphonies were never really about the humor. (That said, there are some funny moments, especially in the background; but at the same time there are some pretty clear opportunities for gags which they more or less pass by.) They were really a showcase for quality animation and (thanks to this short) quality storytelling. And by those metrics, Three Little Pigs is a success. Admittedly, this short also started the Disney trend of taking the darkness out of fairy tales to make them more family friendly. This short doesn't even have a body count!

And speaking of making things more family friendly, it should be noted that the original version of this short featured a remarkably anti-Semitic caricature in one scene. It's a cartoon from the thirties, of course it has to have something offensive! I'm not going to wade into the debate on whether or not Walt Disney was an anti-Semite, although this short certainly lends a great amount of credence to that argument. But after World War II, this scene was considered in poor taste and was edited to be less offensive. When you consider how incredibly racist some of the films Disney made in the 50s were, that is saying something.

Perhaps the most important thing to come out of Three Little Pigs, however, has nothing to do with the short itself, or its massive success, but the lack of success for what came after. Walt Disney released several sequels to this short, but none of them came close to the original in terms of popularity. Rather than accept moderate but reliable success, Disney determined that "You can't top pigs with pigs." It was that conclusion that inspired Disney and his team to keep pushing their craft forward, with shorts like The Old Mill and (eventually) their first animated feature. And frankly, it's a lesson that Disney could stand to learn from today, what with their financially successful but mostly pretty bad live action remakes. You can say a lot of things about Walt Disney, most of them bad. But one thing you have to admit is that he was an innovator; Walt Disney was never satisfied with good enough, and was always trying to provide audiences with something new and exciting. That's something Hollywood could certainly use a lot more of.

"La Luna" is available to watch on Disney +