While their overall track record remains strong, Pixar has had its fair share of misses in the past decade. Brave was not very good. The Good Dinosaur was forgettable. And don’t get me STARTED on the Cars sequels. (No seriously, don’t. It’s pointless. I haven’t seen them so I’ve got nothing to add to the conversation.) But for my money few have been as disappointing as Finding Dory. A sequel to Finding Nemo, one of Pixar’s best movies, focused on its best character? How could it go wrong? And sure, Finding Dory wasn’t bad. But it wasn’t great, or even that good. Still, seeing it in theaters in 2016 wasn’t a total loss. At least I got to see Piper. 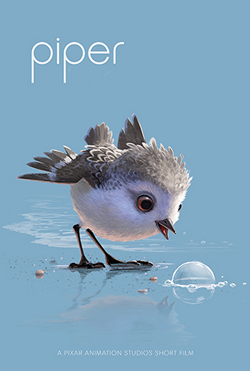 Pixar may have a (well-earned) reputation for being a dominating force in the field of Best Animated Feature, but when Piper was released they were in a bit of a dry spell when it came to Best Animated Short. The studio hadn't won in that category since For the Birds, which was released alongside Monsters, Inc. (Maybe the Academy just likes films about birds.) But their slump finally ended with Alan Barillaro's Piper. So what was it about this short that charmed the Academy so much? What made this film about a baby sandpiper learning to overcome her fear of the water so beloved? There are probably a lot of reasons for Piper's popularity- the gorgeous photorealistic animation, the excellent visual storytelling or the simple fact that everyone love the ocean- but I think I've got it mostly figured out. Folks, Piper won the Oscar because it's so irresistibly cute. 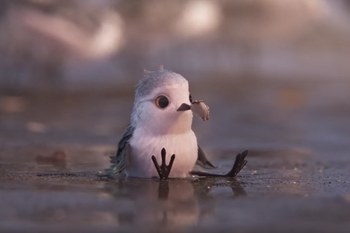 "Cute" is really the perfect word to summarize Piper. From the cute baby bird at its center to the story of interspecies cooperation and family love that movies it forward, Piper is just adorable. It might seem like a bit of a cheat to make a film which relies almost entirely on cuteness, but honestly that's a lot harder than it seems. Cute characters are a dime a dozen, but there's often a fine line between cute and annoying. Tweety Bird is (allegedly) cute and his films suck. (It probably helps that Piper doesn't talk.) And when you consider the fact that the animals in Piper are designed to look more realistic than most cartoon animals. It's remarkable that the characters in this short are expressive as they are. Compare Piper to Jon Favreau's The Lion King; it's night and day. Of course, in a world where people find King Shark cute I suppose anything is possible.

Of course, the reason the filmmakers can pull this off as well as they do is because of the team of talented animators at Pixar. As a studio, Pixar has always been at the forefront when it comes to computer animation technology. And Piper is certainly no exception in that regard. The ocean has rarely looked better in an animated film than it does here. Granted, I'm a sucker for films set in, on or near the ocean, so obviously I was an easy mark for this film. Still, I think even the most hardened of ocean haters out there will find a lot to appreciate about the technical skill on display here. Whether it's the beauty of the water as the light shines through it or the texture of the sand as Piper takes a step. As always, the Pixar shorts prove to be a great place for pushing the medium forward.

A lot of Piper's charm lies in it simplicity, which I think is both its main strength and possibly a bit of a weakness. Yes, it's cute, and it's pretty funny, and it's very well-animated. And that's more than enough, don't get me wrong. But my favorite shorts always have a little something extra, and I think Piper's missing that one thing that puts it over the top. Is that nitpicky as hell? Yes. Can I put it into words? No. Am I just padding this out so I have an excuse to include another GIF? I plead the Fifth.

Of the films we've covered so far in our Year in Shorts, Piper is probably one of the most popular. That's not particularly surprising. Between recency bias and the whole Disney connection, it's a short that a lot of people have seen. But more than that, it's a short which a lot of people love. And what's not to love? It's cute, it's funny and it's nice to look at. Those are all qualities that are great in a person, and just as great to have in a film!

"Piper" is available to watch on Disney +