For as long as there have been movies, there have been movies about fraught father/son relationships. They’re everywhere! Why, I remember when I saw Ad Astra expecting to see a normal space movie and what did I get instead? Bunch of daddy issues! Even our superheroes all have daddy issues! And don’t even get me started on Spielberg. Still, while this storytelling convention may be very, very overused, when done well it can be very affecting. The 2017 short Negative Space is one such example. 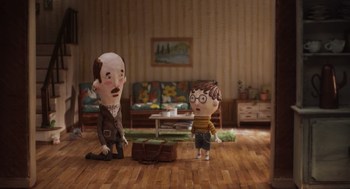 Directed by Max Porter and Ru Kuwuhata, Negative Space is a French film adapted from a poem by Roen Kortge. (There are a lot more animated shorts based on poems than I realized. I guess it really is the perfect medium for it. Not a lot of room to make a feature based on a poem, but a short suits it just fine.) It follows an unnamed man, who narrates to the audience the story of his complex and often distant relationship with his father, mostly framed throughout the suitcases he taught him how to pack. It's a unique angle on a well-worn story, which helps keep the film pretty fresh. "Unique" might actually be the best word for this short, honestly. How many films do you know that can make the act of packing some luggage so poignant?

Negative Space earns some bonus points for me right off the bat by being in stop motion, which you all should know by now I'm a sucker for. And the stop motion in this short is particularly well done. The character designs are all pretty unique (there's that word again!), with their oversized heads and strange facial features. And the film is packed to the brim with clever visuals, such as the driving car turning into a zipper or the tide of clothes washing over the young narrator. While I suppose technically you could pull off those concepts in live action, they really are better suited for an animated film than anything else. And, of course, being in stop motion makes it all that much more impressive. (So I guess in a way, it technically was done in live action! Boy that's a trip to think about.) The animation may not be as fluid as other stop motion shorts we've seen, but it doesn't really need to be. This is a rather melancholy film after all, so it's not like it needed to be particularly dynamic. And besides, this film contains swimming underpants. What more do you need?

I suppose I would be remiss if I failed to mention the cinematography in this short. I mention it all the time in traditionally animated cartoons, so it's kind of weird to ignore it when there is actual physical camera work to talk about, especially when it's as well done as it is here. Nadine Buss and Simon Gesrel certainly did an excellent job on this short, working together with the animators to provide some truly lovely visuals (especially in regards to the final shot of the film), and some of the transitions between scenes are especially impressive. Add to that the haunting score by Bram Meindersma and the understated vocal performance by Albert Birney and you've got yourself quite the film on your hands.

While these "Cat's in the Cradle" style stories are a dime a dozen in the world of cinema, anything stale can feel fresh again with a bit of creativity and a lot of hard work. And luckily for us, Negative Space has both going for it. It's not a great short, and if you're like me, it might be one that you respect more than you love. Still, there's a lot of artistry worth respecting on display, and that counts for something.