A Year in Shorts Day 222: "The Absent-Minded Waiter"

I suppose it’s not really a surprise that Steve Martin has never been nominated for an Oscar, but it still feels wrong nevertheless. I mean, come on. He should have at least been nominated for Little Shop of Horrors, right? Still, even if the Academy never fully appreciated Steve Martin as an actor, at least they knew he was funny as hell. How could they not, with shorts like The Absent-Minded Waiter to watch? 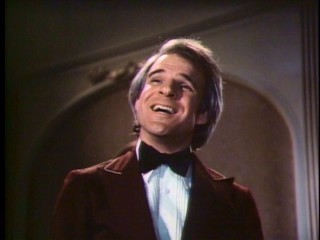 Directed by Carl Gottlieb and written by Martin himself, The Absent-Minded Waiter is one of those shorts that tells you just about everything you need to know about in its title. Released in 1977, it tells the story of Steven, the titular absent-minded waiter, on a typical day at work at a seemingly nice restaurant. It's clear that everyone hates working with Steven, but for some reason he hasn't been fired yet. Presumably he's related to the owner. Regardless, Steven is called into action when married couple Bernie (Buck Henry) and Susan (Teri Garr) come into the restaurant, with Bernie specifically asking to be seated at Steven's table. I know that a lot of you out there are huge Teri Garr fans (hey, who isn't?), but don't get too excited. She and Henry get a couple of good laughs here and there, but this is Steve Martin's show through and through.

But really, seven minutes of Steve Martin Steve Martining it up is hardly anything to complain about. While the premise is pretty simple and the execution a little pedestrian (Gottlieb is more well known for his writing than his directing, and it's not hard to see why), The Absent-Minded Waiter is nevertheless a good time at the movies. And that's thanks entirely to Steve Martin's wit and energy. Steve Martin has a terrific talent for making the silliest things seem perfectly normal (it's why he was so excellent as a much more professional waiter two years later in The Muppet Movie), and that's definitely on display in this short. Steven is a very silly character, and this is a very silly situation, but Steve Martin never makes Steven seem silly. He takes his job seriously and does his best, even though it's not remotely good enough. There's a quiet, almost sad, sort of dignity to Steven, which makes The Absent-Minded Waiter more than just a goofy short. I mean, it is a goofy short as well, but... well you get the idea.

Still, even as a goofy short, it works pretty well. Watching it again I was suddenly reminded of the classic stateroom scene from A Night at the Opera (included above). I'm not saying The Absent-Minded Waiter is as funny as that scene, mind you. Is anything as funny as the stateroom scene? Still, it has a similar energy, with that same fast pace and sense of comic escalation. Or maybe it's just because they both have jokes about food. Who can say?

Is The Absent-Minded Waiter the funniest short we've ever covered? Certainly not. But it's a great showcase for Martin's comedy, and that's more than enough for me. And it should be more than enough for anyone else. And hey, if we view it as a dry run for Steve Martin's Muppet cameo (handily linked above), well then we as a viewing public owe it a tremendous debt. Now there's a movie that got screwed by the Oscars. But that is a story for a different day.