While they’re not household names today, John and Faith Hubley should be familiar to regular readers of The Great Oscar Baiters. Between their groundbreaking work in independent animation and John’s years in the studio system, our look at their films almost counts as a study of animation itself. Indeed, comparing John’s work at Disney and UPA to the Hubleys’ films in the 60s is an excellent way to see how the medium has changed over the years. And there’s no better way to examine that than with their 1968 short Windy Day. 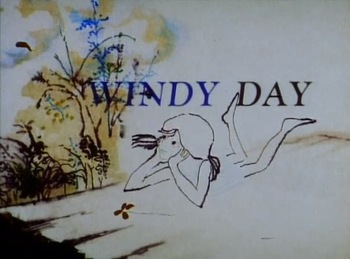 The short that Windy Day can be most easily compared to is the Hubleys' own Moonbird; they're so alike that Windy Day might as well be a sequel. Much like Moonbird, Windy Day was made by recording two of the Hubley children (in this case, daughters Emily and Georgia) and animating a story around their conversation. Now I didn't care for Moonbird and, given the many similarities between the two, you would think that I don't much care for Windy Day either. But I am nothing if not full of surprises, and I must admit that I find this short quite charming. Maybe the animation has improved. Certainly the watercolors produce a lovely effect that's more pleasant to look at. Maybe the girls are just better storytellers. I'm a sucker for weird tangents. Who can say? All I know is that Windy Day simply works for me in ways its predecessor didn't.

I think if I had to try and explain it, I'd say that Windy Day has a strangely wistful feeling that Moonbird didn't. Emily and Georgia's conversations are often funny, but the short also captures that strangely wistful feeling of a childhood afternoon. I can't quite put it into words, but Windy Day evokes for me the same feeling I get from walking to the library or sitting in a field on a sunny day. This short basically is childhood nostalgia distilled into eight minutes, right down to the weirdly profound observations about death. And speaking of nostalgia, I should add that another key difference between Windy Day and Moonbird is that Windy Day didn't win the Oscar, losing instead to Winnie-the-Pooh and the Blustery Day. I guess the Academy was really into breezes that year.