Who doesn’t love Wallace and Gromit? (If the answer is you, please keep it to yourself; we don’t need that kind of negativity in our lives these days.) Everyone’s favorite pair of claymation cheese lovers have acquitted themselves incredibly well at the Academy Awards, racking up a nomination every time they were eligible. They are so successful, in fact, that even their spinoff characters get consistent Oscar nominations. Take Shaun the Sheep, for instance. First introduced in the 1995 short A Close Shave, Shaun has gone on to star in his own series as well as two Oscar-nominated features. And while none of his own films have won an Oscar, at least his first appearance managed to snag itself a trophy. 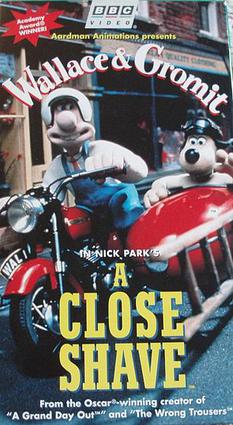 While it has a lot in common with the shorts which came before it, A Close Shave introduces a couple of new elements to the Wallace and Gromit series which would go on to become mainstays for the duo. First of all, Wallace and Gromit have started a new business (in this case, a window washing service); and secondly, Wallace has found himself a love interest in the form of Wendolene Ramsbottom (voiced by Anne Reid). I don't know why Curse of the Were-Rabbit and A Matter of Loaf and Death would both follow suit, but I suppose it makes plotting out the story a bit easier to have some formulaic aspects to riff off of. 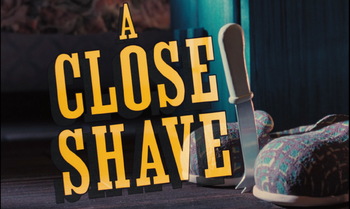 Which makes a fair bit of sense; A Close Shave, in many ways, feels like a series finally getting a grasp on what it wants to be. With its storyline about murdered sheep, sinister conspiracies, a heinous frameup and a killer robot dog, A Close Shave firmly cements the Wallace and Gromit series as Nick Park's way of paying homage to (and lightly spoofing) classic horror movies. (Apparently this was originally supposed to be more explicit, but five minutes of footage had to be cut for time.) This connection is strengthened by the short's moodier lighting and the excellent orchestral score by Julian Nott, which really manages to recreate that classic thriller vibe.

Of course, A Close Shave is not a complete departure for the duo, and Nick Park and his team manage to capture all the classic Wallace and Gromit staples you'd expect. The animation is more fluid than ever, and the action sequences are quite possibly the best in the series. (Apparently A Close Shave was seen as a test run for Aardman before they made their first feature, and it's not surprising; there's some definite Chicken Run vibes in this film.) And naturally, the short is packed to the brim with that quirky British humor we all know and love. Admittedly, Preston might not be as great a villain as Feathers the penguin, but what can you do?

Is A Close Shave the best Wallace and Gromit film? Who can say. However, I do have to say that, as of right now, I think it's my favorite. While The Wrong Trousers is definitely iconic, and nothing can top that model train chase, A Close Shave just clicked for me in the right way this time around. When a creative team is operating with complete confidence and firing at all cylinders, a film really comes together in a way that's just undeniably special. Then again, any Wallace and Gromit is good Wallace and Gromit, so I guess you can't really go wrong no matter what you do.