Of all the classic Disney characters, few have inspired as many questions as Mickey’s dog Pluto. Questions like- Why does Mickey own a dog? Isn’t one of his best friends, Goofy, also a dog? How does that work? Is there a branching evolutionary tree, similar to that of chimps and humans? Is it some sort of sex thing? Is it the gloves? Are the gloves the key? If you put gloves on Pluto, would he gradually gain sentience? If you took off Goofy’s, would he lose it? These are all important questions, but we here at The Great Oscar Baiter are the only ones brave enough to ask the Pluto question that truly matters- Why do people find Pluto appealing in the first place? Sadly, Pluto’s Blue Note offers no answers to any of these problems, only more mysteries. But I suppose we should review it anyway. 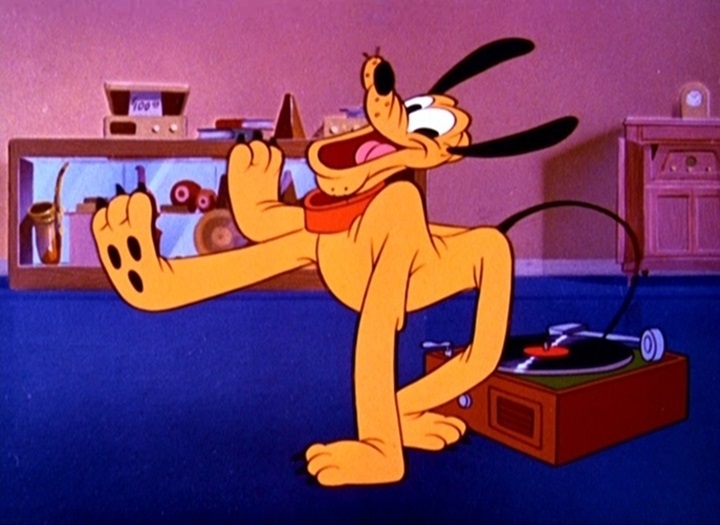 Directed by Charles A. Nichols, Pluto's Blue Note is a 1947 release which features Pluto as he attempts to try and sing along with the various neighborhood wildlife. Unfortunately, district wide budget cuts during Pluto's time in the educational system resulted in the music program being scrapped, leaving Pluto with a horrendous singing voice. Luckily, Pluto wanders over to a record store (because apparently Mickey is an irresponsible pet owner) and discovers that he can plays records using his tail. After stealing a device for himself, he stashes it in his doghouse and lip syncs along with the tune, impressing a wandering pack of lady dogs to the point of fainting. So let that be a lesson kids- if you want to impress the ladies, theft and deception are your best options! 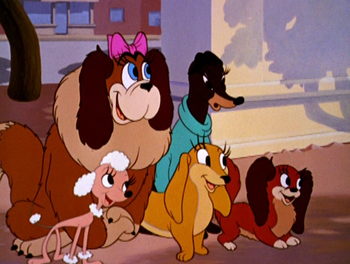 Of all the shorts we've covered so far, Pluto's Blue Note is definitely one of them. To be honest, there's nothing particularly wrong with it. The animation is fine, the music is nice, and while it's not funny, at least it's not offensive. Of course, there's nothing particularly right with it either. It's just a short that exists in its own benign, pleasant way. Really there'd be very little I'd have to say about it if it didn't feature Pluto.

As I've said before, there is something about Pluto I find viscerally upsetting to behold, and this short really drives home way. There's a lot to dislike about his appearance (I could go on about his soulless eyes, or his dangly ears, or his weird wrinkled snout), but I think the key to the whole thing is his teeth. His bright white, perfectly square teeth. Why does he have teeth like that? He's a dog! Dogs have pointy teeth! Why does he have human teeth?! Did he steal them? Whose teeth do you have, Pluto? Whose teeth do you have?!

Anyway, aside from the questionable morals this story teaches children and the neverending parade of body horror that is Pluto's existence, Pluto's Blue Note is a rather unremarkable short. I'm probably either being too harsh or too easy on it, but either way it elicits a big old shrug from me. It says a lot when a film loses to a Tweety short and I don't feel obligated to defend it. Then you know I've got nothing to say about it.

"Pluto's Blue Note" is not available on Disney +, presumably because Disney is as disturbed by Pluto as I am.