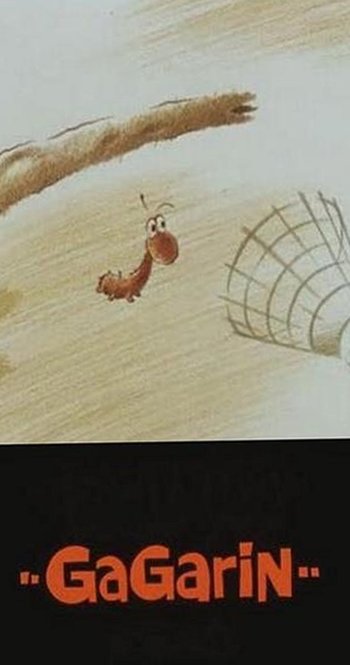 Granted, Gagarin has very little to do with its namesake, unless Yuri Gagarin was once a curious caterpillar caught in the middle of a badminton game. I wouldn't know, I'm a film blogger, not an expert in the history of Soviet space travel. But what I do know is that Gagarin is a cute and funny short with some nicely expressive character animation and a pleasant sketch-like aesthetic. And I certainly know it's more than worth the three minutes it'll take you to watch it.

See? Thoroughly cute stuff. It's not a great short or anything, but it's a pleasant watch, and sometimes that's all you need. I especially like the use of colors, which seem to have been done with colored pencils. It gives the whole thing a rough quality that's still pleasant to look at, something you don't see a lot of in animated films. And really, the caterpillars are just cute as hell, and I give a lot of points for cute. What can I say? I'm a softie.

Why do you think "The Last Jedi" is my favorite Star Wars movie?

Gagarin does not exactly reinvent the wheel as far as animated shorts go. It doesn't do anything new or revolutionary or even particularly great; and seeing as how it was going up against the Wallace and Gromit short A Close Shave, it really had no chance of winning an Oscar. But it's a damn good short, and I'm glad I watched it. Sometimes people get so hung up about whether or not the Oscars are celebrating truly great films that we never consider the attention they give to perfectly good films that might otherwise have gone ignored. Even with an Oscar nomination, Gagarin is pretty obscure. But hopefully after today, it's a little less obscure than it was yesterday. After all, you've seen it now, haven't you?