A Year in Shorts Day 3: Rhapsody in Rivets

In the 1940s, the Academy Award for Best Animated Short (then called Best Short Subject: Cartoons) was dominated by two names- Tom and Jerry. Over the course of ten years, the iconic duo were nominated for nine Oscars, winning five. And perhaps no short of theirs was better than the 1947 classic The Cat Concerto.

None of that has anything to do with today's short, except to remind you that there are better shorts featuring classical music than Rhapsody in Rivets. 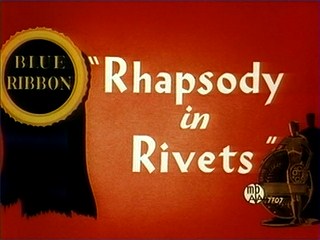 Rhapsody in Rivets was an installment in the Warner Brothers Merrie Melodies series, which was at one point distinguishable from Looney Tunes, but wasn't really by the time this came out. Released on December 6, 1941 and directed by animation legend Friz Freleng, Rhapsody in Rivets is the story of a group of anthropomorphic animals constructing a building to the tune of Franz Liszt's "Hungarian Rhapsody No. 2". That particular piece is a particular favorite amongst animators, showing up in the aforementioned The Cat Concerto as well as the dueling piano scene in Who Framed Roger Rabbit.

"No, it's fine. I'm only considered one of the greatest pianists of all time, but most people know me because of some cartoons. It's fine. It's FINE."
(via Wikipedia)

If it seems like I'm stalling talking about today's short, it's probably because I am. There is nothing particularly wrong with Rhapsody in Rivets. There's just nothing particularly interesting about it either. The concept is certainly clever enough, but the gags are all pretty standard, with nothing to set it apart from similar, better cartoons that were out at the time. The animation is fine, if nothing special. 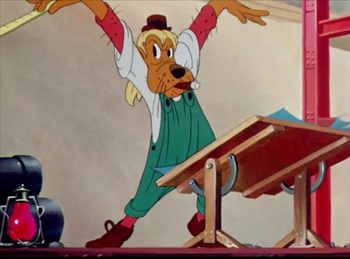 Altogether, Rhapsody in Rivets isn't a horrible way to spend your time, but it's hard to recommend it. Classical music and cartoons are a tried and true partnership, and there are countless better examples out there. Hell, there are better examples using this very piece of music! And if you really want to see a great cartoon about building construction, the "Rhapsody in Blue" sequence from Fantasia 2000 tackles that particular idea wonderfully. Unless you're a huge fan of Warner Brothers animation or an Oscar completionist, I'd give this one a pass.

Rhapsody in Rivets was released in a year where the Academy nominated a total of ten animated shorts, and I wonder if it would have gotten the nomination in a roster of five. Either way, Merrie Melodies wouldn't win the Oscar that year, and neither would Tom and Jerry. No, both of them would lose to the Disney short Lend a Paw, featuring Pluto, arguably the most disturbing looking character in all of animation. Still, it could be worse.

It could have been a Tweety short.

As always, the official Year in Shorts rankings can be found here on Letterboxd.

Rhapsody in Rivets is available to stream on HBO Max.

Disclaimer: This blog is a not-for-profit work of criticism. All images and videos herein are property of their respective owners and are protected under Fair Use.