Over the last seventy-nine years, The National Film Board of Canada has been nominated for seventy-four Academy Awards, winning twelve. The majority of the NFBC’s awards success has come from their short films, many of them animated. A great deal of these shorts have been lauded for their experimental animation and quirky sense of humor. And there are shorts like Richard Condie's 1996 short La Salla. 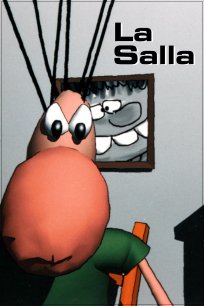 Now, to be clear, La Salla has experimental animation. And it definitely has a quirky sense of humor. But whereas in some shorts that works really well, in this particular case it just does not come together.

La Salla is, technically speaking, an operetta, which is certainly a first for us here at The Great Oscar Baiter. It is, ostensibly, a cautionary tale about the dangers of giving into temptation. To me, it just seems like an excuse for Richard Condie to throw a bunch of random nonsense at the wall and see if any of it sticks.

Well, for me at least, very little of it does. I find La Salla to be an incredibly annoying short. The whole thing is just off putting and ugly, and at eight minutes, it more than overstays its welcome. The random type of humor can be very hit or miss, and pretty much all of it misses. It's just weird for the sake of being weird, and I usually need something more than that. At least give me some pleasant animation to look at!

I give La Salla credit for being unique, but that only gets you so far. If you're the type of person who likes things that are weird just for the sake of being weird, you'll probably like this. If not, there are better ways to spend your time.