In 1928, Walt Disney and Ub Iwerks released Steamboat Willie, the official debut of Mickey Mouse and one of the first cartoons to feature synchronized sound. Despite its critical acclaim and historical significance, Steamboat Willie will never be covered here on The Great Oscar Baiter for one simple reason- It wasn’t nominated for an Oscar! (Steamboat Willie was released during the eligibility period for the First Academy Awards, but the Academy wouldn’t recognize short films until the Fifth). Still, the spirit of Steamboat Willie and other early Mickey Mouse cartoons lives on in today’s short, the delightful Get a Horse! 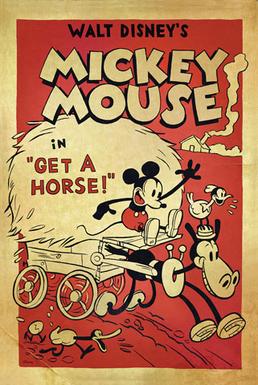 Released in 2013 alongside the theatrical release of Frozen, Get a Horse! was directed by Lauren MacMullan, making it the first film in Disney history to be directed solely by a woman. MacMullan also developed the short's concept, which is a pretty simple but clever one- Get a Horse! begins as a throwback done in the style of the Disney shorts of the 1920s, until Peg-Leg Pete's involvement pushes Mickey out into the "real world", a 3-D full-color movie theater. Hijinks inevitably ensue. 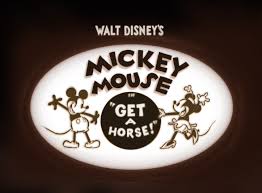 Despite its relative straightforwardness, a lot of work had to go into Get a Horse! to get it just right. Most important to the short's success is the hand drawn portion of the film, which I think the film definitely nails. It certainly helps that Mickey's voice is provided by archival clips from the original Mickey himself, Walt Disney, but I think it goes beyond that. I am, admittedly, not an expert on the Mickey Mouse shorts of the 1920s, but I think this film captures their style and sense of humor quite well. Much of the comedy in Get a Horse! relies in old school "cartoony" sight gags, and I think they all more or less work.

Mickey Mouse himself feels a little more in line with his original characterization here too, especially in the bits where he deliberately causes Pete grievous bodily harm. That old school humor is present during the 3-D portions of the film as well, with a lot of fourth wall breaks and characters messing with the movie screen to achieve their goals. It's consistently funny, and at just over six minutes long it's a brisk watch. It might not be the funniest short Disney's produced, but it's definitely among their most clever, and that counts for something.

As clever as it is, Get a Horse! didn't win the Oscar that year, losing instead to the French short Monsieur Hublot. It's hard to say Disney was robbed that year; Monsieur Hublot is a very good short in its own right, and Disney was already dominating the animation conversation with Frozen. And really, it's always nice when an animated short from a smaller studio wins the Oscar, don't you think?

But either way, Get a Horse! a very fun short and well worth seeking out if you haven't seen it yet. The film both celebrates Disney's past as well as looking to the future, showing that there's a home for both 2-D and 3-D animation. Hopefully, the studio remembers that with some of their feature films.