A Year in Shorts Day 26: "The Little Orphan"

Happy Thanksgiving everyone! In the spirit of the holiday, I’ve decided to talk about something I’m thankful for. And that, of course, means talking about Tom and Jerry and the Oscar-winning short The Little Orphan. 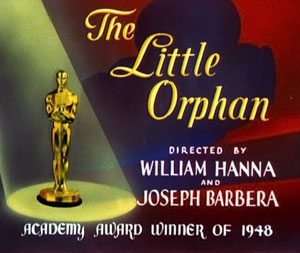 Of course, The Little Orphan just also happens to be a short ABOUT Thanksgiving, despite first being released in April of 1948. Either way, it's a Tom and Jerry short you've probably seen- A little orphan mouse named Nibbles comes to Jerry's house for Thanksgiving and chaos, predictably, ensues.

Directors William Hanna and Joseph Barbera had the Tom and Jerry formula figured out by this point, and they don't do much to stray from it here. But formulas are formulas for a reason, and The Little Orphan is chock full of the classic Tom and Jerry mayhem you know and love. It's hard to exactly explain why they work so well, but they do.

Admittedly, The Little Orphan isn't the best Tom and Jerry short. It takes a little too long to get going, and I'm not a particularly big fan of Nibbles. He's just a little too cute, and Tom trying to eat him makes him a little too unlikable. It's one thing for Tom to try and eat Jerry; Jerry's an asshole. But Nibbles is just a baby, and the rivalry isn't as fun with him involved. The short also relies on some more racist humor, including a blackface gag that was removed from later versions of the short, including the one I watched for this. 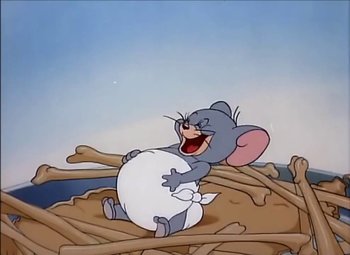 Still, The Little Orphan is a fun short nevertheless and definitely worth checking out if you haven't seen it. Even an average Tom and Jerry short is still something to be thankful for!