Much like the Silly Symphonies of old, Pixar's short films served two purposes. One was to simply make good, entertaining shorts that people could enjoy. But beyond that, the shorts were always designed to push the limits of what computer animation could do. They did it with Luxo Jr. they did it again with Tin Toy. And in 1997, Pixar once again pushed the boundaries with Geri's Game.

After the critical and commercial success of Toy Story, Pixar was on top of the world. No longer a studio making shorts and commercials, they were in the animated feature business. But as production began on A Bug's Life, Pixar co-founder Ed Catmull decided that in order to advance new technology and train new directors, the studio should also go back to making shorts. Pixar hadn't released a new short since 1989's Knick Knack, and Catmull approached director Jan Pinkava with an assignment- to make a short film featuring a human character.

While Pixar had certainly proven themselves to be master technicians and artists over the years, there were still a great number of concepts that eluded them. As anyone who has seen Tin Toy can attest to, animating realistic, not terrifying humans was one of those elusive concepts.

I had to see this and now so do the rest of you.

And thus Geri's Game was born. Pinkava, who had only directed TV commercials by that point, was put in charge of coming up with a story that could be made into a workable short. After some false starts, Pinkava took inspiration from his grandfather, who often played chess by himself. Once the story had been properly developed, the real work could begin.

From a technical perspective, Geri's Game is an achievement. While the animation may look a little dated compared to Pixar's more recent output, this was groundbreaking stuff in 1997. Animators worked tirelessly to make Geri expressive and plausible, while engineers designed entirely new technology to more realistically animate cloth. 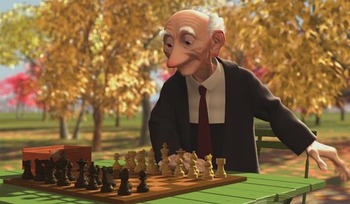 Still, Pinkava was wise not to get too focused on realism, and took inspiration for Geri's design from Czech animator Jiří Trnka. The decision to make Geri more stylized than the humans in earlier Pixar projects (such as Toy Story) proved a wise one for multiple reasons, and it's no surprise that Pixar would regularly adopt this practice in their future films. Not only did it give the animators some leeway in rendering Geri "realistically", it also allowed him to be more expressive, which is certainly necessary with the story they went with.

Oh, right, we haven't talked about the story yet, have we? As popular as this short is, it almost feels unnecessary. But for those not in the know, here's the basic summary- Geri is a sweet old man, sitting alone in the park with a chessboard. Having no one else to play with, Geri decides to play a game against himself. However, his "opponent" is much more aggressive and mean-spirited than he is usually, so Geri has to come up with a clever plan to win.
It's a very simple short at heart, but it works perfectly. Pinkava and his team did a fantastic job at making sure both Geris were distinctive characters while also keeping them consistent enough so we never lose sight of what's going on. The short is well-paced, and it once again demonstrates Pixar's mastery of wordless storytelling. It even has a twinge of that trademark Pixar melancholy, but it never pushes things too far. Watching an old man play chess by himself might seem a little sad, but he certainly seems to be having a good time.

All in all, if you haven't seen Geri's Game yet, you should definitely get on that. It's a wonderful, charming short, and it's really no wonder that it won the Oscar that year. Pixar would later rerelease it to play theatrically with A Bug's Life, beginning a (mostly) great tradition for the studio. From both a technical and storytelling perspective, Geri's Game is a true classic.

"Geri's Game" is available to watch on Disney +

A great deal of my research for today's entry came from this great interview with Jan Pinkava done by Cartoon Brew. If you want to know more about the short's production, I highly recommend it.