A Year in Shorts Day 22: "One Droopy Knight"

Hello, all you happy people.

While Droopy may not be one of Tex Avery’s most iconic creations, he’s certainly managed to stay in the popular consciousness. My earliest memories of him were from his cameos in Who Framed Roger Rabbit and the Tom and Jerry movie (and the less we say about that abomination, the better). Still, despite his long shelf life, Droopy has only ever approached Oscar gold once, with today’s short One Droopy Knight.

Directed by Michael Lah and produced by Hanna-Barbera, One Droopy Knight is a pretty simple story. It is also, apparently, a remake of the 1949 short Señor Droopy, although verifying that would require research beyond trusting Wikipedia, and we simply can't have that. Either way, One Droopy Knight tells the story of Sir Droopalot (Bill Thompson, whom you may recognize as Mr. Smee from Disney's Peter Pan) and his attempts to slay a dragon to win the hand of a beautiful princess. 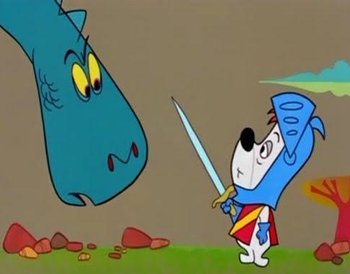 It's all pretty standard stuff and it makes for a fairly standard short. It's entertaining enough, but nothing spectacular. The animation is cute, but it's very obvious that MGM was beginning to cut corners (this was one of the last theatrically released shorts from the studio). Droopy is a fun character, but I'm not sure I want him as a romantic lead. And the gags are amusing, but never inspired. More than anything, the short feels very repetitive, and there's hardly any sense of rising or falling action. Sure, a lot of cartoons from the day were just excuses to throw in as many jokes as possible, but the best ones still had great pacing and could keep your interest throughout the runtime. One Droopy Knight stays more or less at the same level the whole way through.

Alas, while Droopy may have won the heart of the princess, he did not win the Oscar. No, poor Droopy suffered the ultimate indignity- losing to Birds Anonymous. A Tweety short