Nearly two weeks ago we covered The Old Mill, a classic Disney short beloved by animators the world over. Today’s short, The Old Mill Pond, was released one year before The Old Mill, and has otherwise very little in common with the Disney effort. I only bring it up because this mild coincidence is really the only interesting thing The Old Mill Pond has going for it. 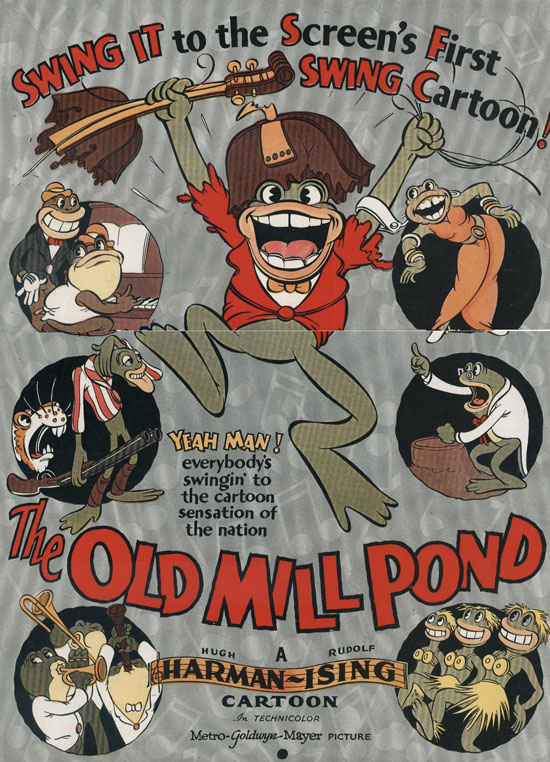 Directed by Hugh Harman and released in 1936, The Old Mill Pond was part of MGM's "Happy Harmonies" series of shorts. I don't know about you, but the name "Happy Harmonies" does not instill a lot of confidence in me. It makes it sound like whichever short you're about to watch is just a paltry imitation of the "Merrie Melodies" or "Silly Symphonies." Which, I suppose, is pretty true.

Probably the biggest issue with The Old Mill Pond is what I imagine made it such a popular short in the first place- the pop culture references. Virtually every joke in this short can be described as thus- A frog is drawn to look like a well known performer from the time, then they do said performer's routine. I can't imagine this was exactly groundbreaking humor in those days, and it comes across even worse now. Sure, Cab Calloway and Louis Armstrong may be timeless, but how many contemporary viewers are going to recognize a Stepin Fetchit reference?

As anyone who's seen a Dreamworks film can tell you, putting pop culture references into your cartoon can be a double edged sword. Sure, you'll get the adults laughing, but unless you happen to reference someone truly timeless, your joke is going to age like a fine milk. And if you rely too heavily on that kind of humor you're going to end up with something like Shark Tale. Although, admittedly, Shark Tale didn't have a song as awesome as "The Ghost of Smokey Joe".

Still, there is a form of humor lower than the pop culture reference, and unfortunately The Old Mill Pond has an abundance of it. Yes folks, once again we find ourselves talking about yet another racist cartoon. I know that some have argued that the designs of most classic cartoon characters (Mickey Mouse especially) have their roots in minstrel shows. I'll leave that debate to people smarter than me to decide; all I'll say is that, if that's the case, I feel like most classic cartoons I've seen aren't quite so blatant as this one.

Is there anything redeeming about The Old Mill Pond? Honestly, not really. The animation is fine, but nothing spectacular. And sure the music is nice, but it's not as if the filmmakers wrote it, so I'm hardly going to give them credit for that. It's just a bad short that's not worth your time. My advice? Stay away and listen to some Cab Calloway instead.

Or, failing that, at least some Big Bad Voodoo Daddy.