Fellow Oscar Baiters, I have a confession to make. Despite proclaiming myself as a big fan of animator Don Hertzfedlt, there are many of his films which I haven’t seen. And that, unfortunately, includes the final two entries in his World of Tomorrow trilogy. I meant to fill in that blind spot when the time came to cover him again, but no matter how much I pushed this day back, time and money would not permit me. So it is with a heavy heart that I admit defeat and will only be covering the first chapter in his trilogy, released in 2015, in order to make sure I give it the proper coverage it deserves. After all, it IS the only entry in the series to receive an Oscar nomination, and this is the Great Oscar Baiter, not the Great Whatever the Hell I Feel Like Watching Baiter. Why the other two failed to get one is a topic we may discuss another day. But for now, let’s look at the wonderful weird world that is Don Hertzfeldt’s World of Tomorrow.

World of Tomorrow is simultaneously very similar to and very different from a lot of Hertzfeldt's earlier works. It contains a lot of his usual trademarks- a simplistic style of animation, a preoccupation with time and memory and his goofy sense of humor- but seen through a different lens. It is a science fiction short, in which a young girl named Emily is contacted by one of her clones (in the future, people clone themselves to become effectively immortal) to teach her about the titular world of tomorrow. This being a Don Hertzfeldt film, this particular vision of the future is a grim and goofy one, filled with such details as robots programmed to have a fear of death and an art installation featuring a clone in a tube. The humor in World of Tomorrow isn't quite as random or violent as that of Rejected, but it is infinitely more depressing and quite a bit more clever. And perhaps most importantly, the film also has one thing Rejected didn't- a great deal of heart! While World of Tomorrow might not be quite as much of a tearjerker as Hertzfeldt's excellent feature, It's Such a Beautiful Day (which, it should be noted, started life as a trilogy of shorts), it nevertheless has many affecting moments and sobering reflections on the passage of time. When viewed on its own, World of Tomorrow is a beautiful film; but when placed in the context of the rest of Hertzfeldt's films it can be seen as a culmination of all that's came before, tempering his weird sense of humor with his even weirder sense of sentimentality.

The film also has its roots in broader animation history as well as Hertzfeldt's own. The character of Emily-Prime is voiced by Hertzfeldt's niece, Winona Mae, who was four years old at the time. Much like the Hubleys befoe him, Hertzfeldt recorded his niece's ramblings as she drew and played, using the recording to help create the plot of the film. Co-starring with her is Julia Pott as Emily's clone, who reacts to all the film's nonsense with an almost bored affect. The two make a great double team, with Winona Mae's imaginative ramblings providing a charming counterbalance to Pott's dark observations and sometimes annoyed responses. There's always an inherent risk in casting a young child as the lead in your film, but it pays off wonderfully here, managing to be utterly charming without ever dipping into the territory of annoying. Admittedly it helps to have someone undercutting every bit of cuteness with someone who is just saying the most depressing shit imaginable. Or maybe it's the cuteness doing the undercutting? Perhaps there's no undercutting at all, and instead the two just work together in perfect harmony. 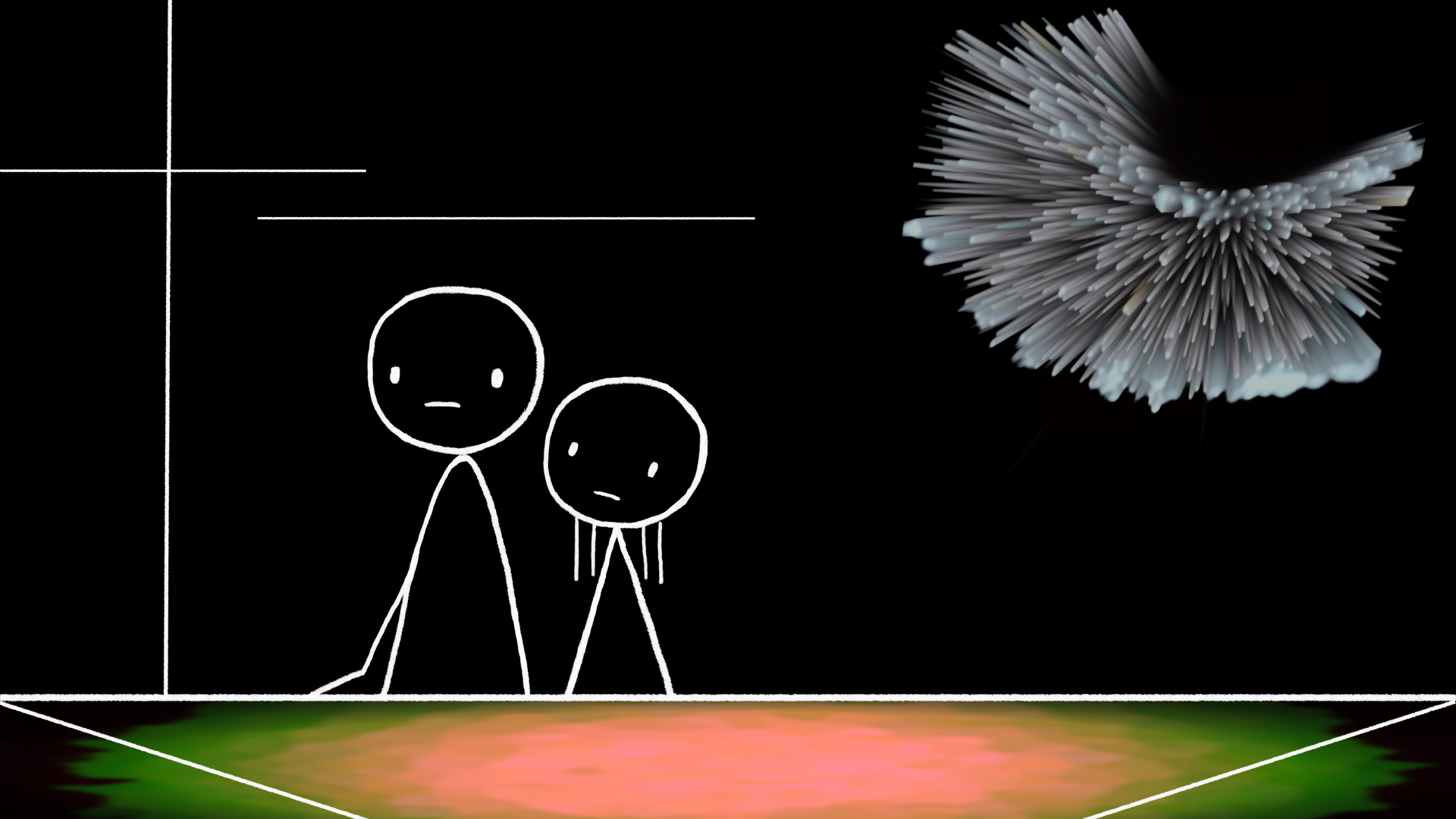 Speaking of perfect harmony, one can't discuss World of Tomorrow without mentioning Hertzfeldt's transition to digital animation. Simply put, it is a flawless one. Hertzfeldt loses none of the charm seen in his earlier traditionally animated shorts, while gaining all the new and exciting opportunities the world of computers provides. (I don't exactly know the details of how the film was made, but I assume that the character animation was still "hand drawn", while the backgrounds and color effects were done with computers. Just don't quote me on that!) I remain utterly amazed by all that Hertzfeldt can do with simple stick figures, conveying an unbelievably wide range of emotion with just a few lines and slight movements. (A particular favorite moment of mine is when Clone Emily gives Emily-Prime some side eye.) But the addition of computer graphics and a wide range of colors really takes the short to a new level. Doing a lot with a little has always been Hertzfeldt's strength, so I suppose it stands to reason he can do a hell of a lot with just a bit more.

Is World of Tomorrow my favorite Don Hertzfeldt film? Not quite, although perhaps that'll change whenever I get around to finishing the trilogy. But really, comparing his filmography is like picking a favorite season of Breaking Bad- it's all great, so it just comes down to the details. So while It's Such a Beautiful Day still holds the top spot for me, At any rate, I think it's fair to say that World of Tomorrow is one of the best films released in 2015, which (considering the release of heavy hitters like Inside Out, Creed and Anomalisa) is really saying something. I'd go so far as to say the only better film I've seen from that year was Mad Max: Fury Road. Hot damn, 2015 was a great year for movies wasn't it?

Unfortunately, it wasn't really a great year for the Oscars. Don't forget that this is the year Leonardo DiCaprio won for his "performance" in The Revenant. (Oh wow, he acted cold by subjecting himself to ungodly cold temperatures! What acting!) And unfortunately the questionable decisions extended to the Animated Shorts category, with the award going to Bear Story instead. Now, full disclosure, I haven't seen that film yet, so it's entirely possible that it deserved it. Perhaps we'll know for sure when we get to ANOTHER Year in Shorts. Perhaps I'll have seen all of World of Tomorrow by then too! But that's all the past and the future, and if we've learned anything from today's film it's to appreciate the present. And in the present we just talked about a truly amazing short!