Back in December, we covered Jimmy Picker’s Sundae in New York, a pretty terrible short about Ed Koch singing “New York, New York”, redeemed only by its decent claymation. Well today we’re talking about Jimmy the C, another claymation short, this time about Jimmy Carter singing “Georgia on My Mind.” And guess what? It's ALSO directed by Jimmy Picker. Say what you will about the man, he certainly has a consistent vision! 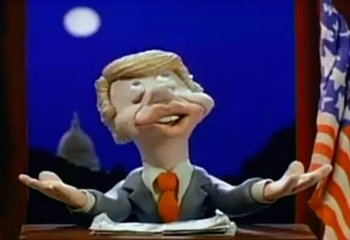 Released in 1977, Jimmy the C is... well, it's pretty much exactly how I described it in the opening paragraph. There's not really a lot to explain regarding this short, nor is there much to set it apart from Sundae in New York. I guess the animation is slightly worse, but that's not really a surprise; it would make sense for Picker's animation to improve after six years, right? Nevertheless, that's a point against it. But in Jimmy the C's favor, it must be said that at least this film just uses an already existing version of "Georgia on My Mind" (Ray Charles', naturally) instead of making its own. In a way, this makes the short much lazier than Sundae in New York. But far more importantly, it makes the short much less annoying. I think that kind of sums up this short in a nutshell, really. (And I mean that literally; there are singing peanuts in this film.) It's more or less the same as Sundae in New York, just less so. That's not really a ringing endorsement, sure, but it's not nothing.

Ultimately, there's not much to be said for Jimmy the C. It simply exists on its own terms, and how much you get out of it will depend on how much you care for what it's trying to do. Last time we covered a Jimmy Picker films, I went on a bit of a tangent involving Better Off Dead and the idea that being remembered is ultimately better than being Oscar-nominated. But I won't do that today. Perhaps I've grown soft as we approach the end of our Year in Shorts. Perhaps Jimmy the C is less offensive to me because it didn't win the Oscar, thereby not robbing the award from a much worthier film. Or maybe I just don't give a shit. Personally, I think it's a combination of all three. I can't say that I recommend Jimmy the C, but I can't really say it offends me either. Still, I'm glad to be done with it either way.