If the Oscars are anything to go by, 1935 must not have been a great year for animated shorts. We’ve covered two of that year’s three nominees, and so far they’ve ranged from fairly bad to incredibly bad. Today’s short (and that year’s winner), the Silly Symphony Three Orphan Kittens, falls somewhere in between the two in terms of quality. So I guess just… normal level bad? Yeah, let’s go with that.

Directed by David Hand, Three Orphan Kittens tells the story of three kittens (imagine that) who are abandoned out in the snow, something which seems to happen to cartoon kittens with alarming regularity. Needing a place to stay and being wholly ignorant of the concept of breaking and entering (might as well call this thing Three CRIMINAL Kittens), the titular cats decide to enter a nearby house. What follows is what you'd probably expect from this type of Disney short- cute little kittens running around in a house, getting into all sorts of hijinks that aren't particularly funny but are, at least, amusing. Something you also might expect from a short like this? Horrible racism! (If you didn't expect that, welcome to The Great Oscar Baiter!) The short starts off on the wrong foot when the kittens enter the house, which is being tended to by a pretty offensive stereotype of an African-American woman. That's certainly bad enough, although not something worse than you saw in a lot of Tom and Jerry cartoons. But the short really takes it to a new level when a kitten stumbles upon a doll that resembles a crude caricature of a Black girl who says "Mammy!" instead of "Momma." Yikes. There's a reason why this short's not available on Disney +, folks. 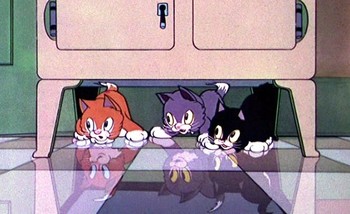 Is there anything about Three Orphan Kittens that makes it worth watching? Well... no. No, there really isn't. Aside from, you know, the racism, there's nothing on display here which makes it better than any other Disney short from that time period. But if you're an Oscar completist like me, it won't be the worst cartoon you'll wind up watching. The animation is as good as ever, and arguably a little more complex than the earlier Silly Symphonies. And I guess if you want to watch a cartoon about cute cats getting into trouble, this will do that for you. But if you're looking for a short which does anything else, you're better off looking elsewhere. Preferably for something less racist! As for why the Academy picked this film for Best Animated Short, I have no idea. Maybe the competition was that bad. Warner Bros. hadn't really found its footing yet, and most of Disney's offerings from that year don't exactly sound that promising. Still, one can't help but think that the Fleischers certainly must have had something worthier out that year? That's just the power of Disney, I guess.